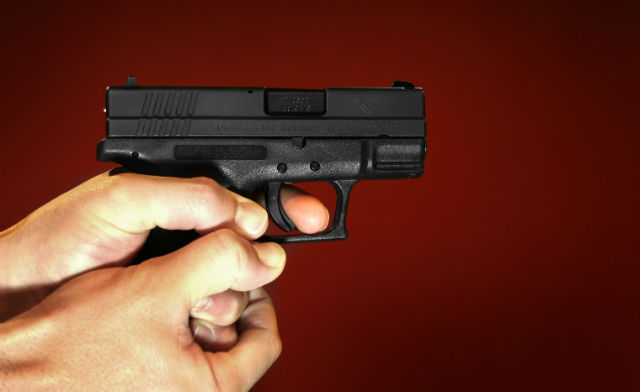 Want to learn more about dry fire? Check out this guide for beginners!

Dry fire training, of course, is one of the best things you can do to build essential shooting skills. It doesn't matter for what purpose that might be; it can be for self-defense, competition, pure target shooting, hunting, whatever kind of shooting that might be.

You get to put in necessary, vital and beneficial repetitions, for free, that can make you better at whatever kind of shooting you want to do with the gun that you're going to use to do it with. Handgun, rifle, shotgun...whatever.

So what are these 5 dry fire drills? Let's get stuck in. 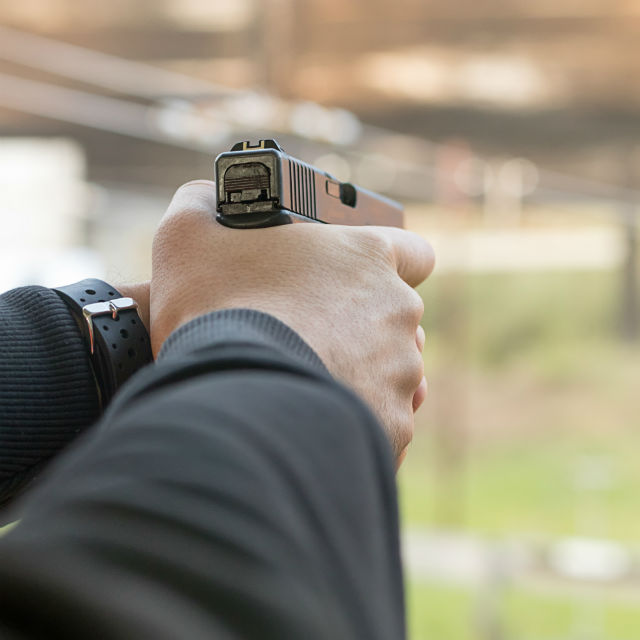 Pick target, shoot target; the most basic dry fire exercise isn't a dry fire drill per se but is instead just doing the absolute bare minimum in dry firing.

You pick a target, and dry fire at it. It's really that simple.

That doesn't necessarily mean EASY, however; climbing Mt. Everest is simple - climb the mountain - but that doesn't mean you can just walk up.

What you're trying to do with this kind of exercise is to execute the basics, the sheer fundamentals, and do it perfectly. Then do it over and over again.

Doing that once...is easy. Doing so dozens of times in an afternoon and for every rep to be fundamentally sound actually isn't. It takes a lot of concentration, it takes mindfulness, and that's not necessarily easy to do time after time after time.

The "wall drill" said to have been developed by George Harris, the instructor who helped start and found the Sig Sauer Academy, more or less the world's largest shooting school.

The wall drill is simple. Pick a spot on the wall, either a bit of wall texturing you can readily identify or perhaps a knick knack or small target, such as a little bit of tape. With your unloaded pistol (obviously) you align the sights on the object, taking time to build and maintain a proper grip and squeeze the trigger.

Take your time, too; speed isn't the goal here, precision is.

Focus on the front sight, with the target object in the immediate background. Once your sights are aligned, and you've got a good grip, squeeze the trigger. What should happen is the gun should go "click" and the sights should not move.

If those things are done correctly, the bullet will go where the gun is being pointed.

Remember, the idea here is perfect technique, not speed or anything else. Perfect execution of fundamentals. 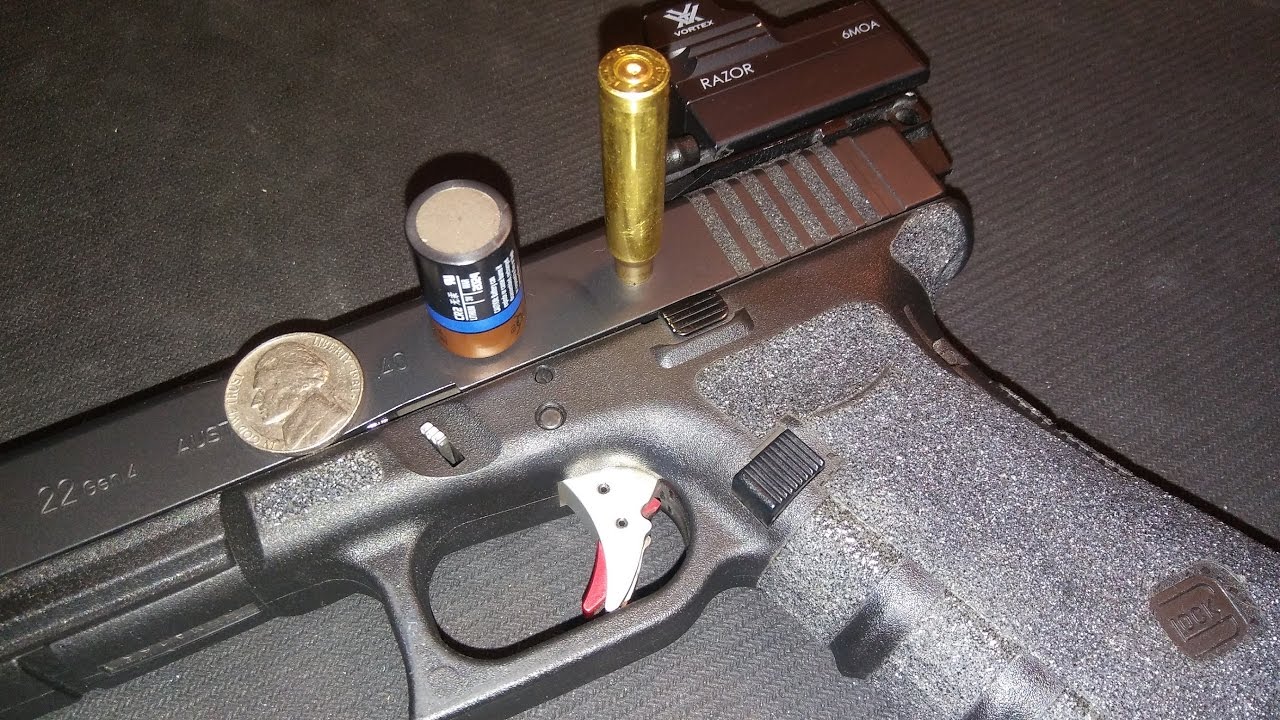 The Balance Drill, as it's called, is a similar concept to the Wall Drill, but involves a little more flair by balancing an object on top of the gun.

How it's done is to place an object on the slide or barrel (if using a revolver) and balance it. It can be a coin, a battery, a cartridge, whatever you have on hand.

Alighn the sights, get a good grip and squeeze the trigger. The object should stay perfectly in place. Just as with the Wall Drill, what you're looking for here is a perfect trigger press, such that the gun doesn't move.

With both the Wall Drill and the Balance Drill, you never want to rush yourself. What you want to achieve is consistent good execution. Build a good grip, align the sights properly, and a good trigger press, and to do so consistently.

Again, it's about the foundations. If those are solid, the shot will go where you're pointing the gun, and that's the foundation of good shooting and that's what these two drills are all about. 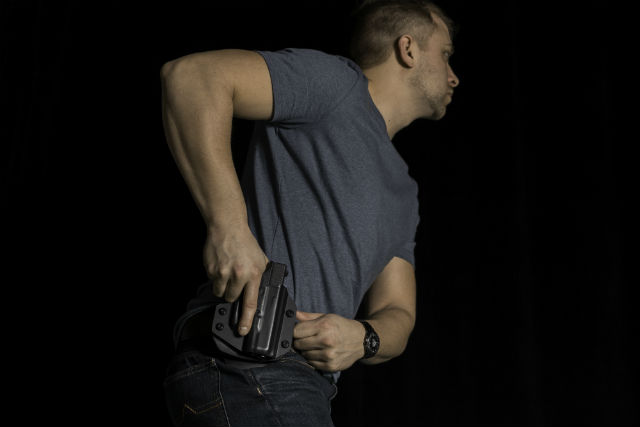 The "First Shot Drill" is a dry fire version of the first shot from concealment. Draw, present, sight, squeeze.

You'll want to set up a target of some sort, ideally something like a paper plate, an NRA B8, or perhaps a printable shooting target. While you obviously want to practice for accuracy, the goal with this dry fire drill is more of the total package.

Shot placement is important of course, but so is the draw, the presentation, and breaking the shot itself.

If you haven't ever had any, take a defensive shooting course or get some coaching from a qualified instructor to get a handle on the fundamentals of drawing and presenting from the holster.

It isn't so much that "slow is smooth and smooth is fast," it's more that "efficient is efficient" and that's what you want to be. Go fast enough to be able to get the gun out, on target and break a good shot every time without slipping up.

A good practice here is to get and use a shot timer. After setting a base time of how fast your first shot is cold - no warm up, this is how fast you are on the street - you start trying to make faster times.

And keep a training log! Document your progress. That way you can keep making meaningful progress. 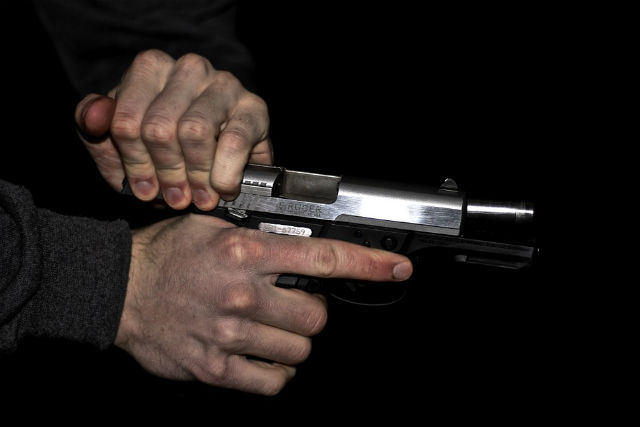 Another easy dry fire drill for working on those fundamental skills is a two-shot "reload" drill. It isn't a perfect simulation of range or real-world conditions - more on that in a second - but it's a great exercise for the tasks you need to perform for reloading or malfunction clearance.

You'll want to use the mag carriers you carry on the street for concealed carry, or if doing this more for competition purposes, your competition rig. You'll need two magazines...and make sure all magazines are empty!

With one empty magazine in the gun, you take one dry fire shot. Release the empty magazine, insert the new one and slingshot (rack the slide) the pistol to charge it. Then dry fire again.

The issue, course, is that you can't get the slide to lock back on an empty magazine, even if you use snap caps, so - again - not a perfect simulation of a reload. The conditions are different, but the key idea here is the motions are exactly the same.

You could treat it as a malfunction drill - and add a snap cap to your second magazine for more realism - or accept the shortcomings and practice the motions (dry fire, reload, dry fire) because those are literally the things you'll do in a live fire reload.

Just as with the first shot drill, a good idea here is to add a shot timer. Start with smooth, efficient motion and work on getting faster. 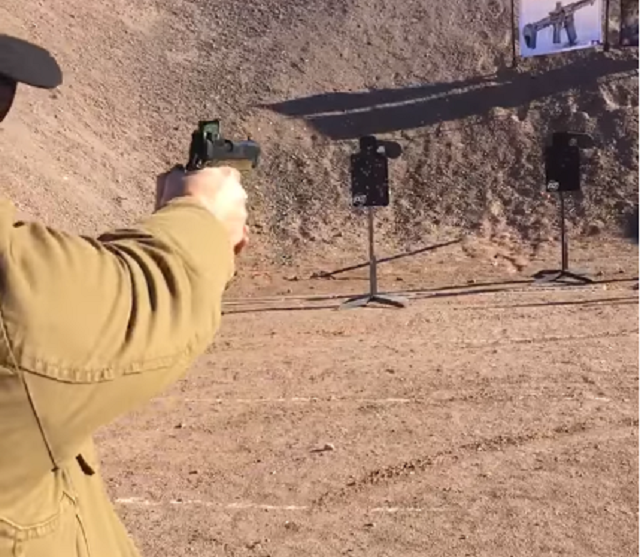 Instead of being one actual drill, "target transition drills" are a class of shooting exercises where the shooter transitions from one individual target to another.

This can be something like the Failure/Mozambique drill - you transition from the body to the head - to an exercise like an El Presidente or Vice Presidente drill, where you transition between multiple silhouette targets.

Here's the hitch: not all guns can necessarily do multiple dry fire shots in a row. So you need to know if it's even possible...though there might be a workaround.

What does that mean?

Okay, so here's the relevant bit: some semi-auto handguns, but not all, have a dead trigger until the slide cycles and the weapon is recocked. On others, you can actually still pull the trigger, but you just won't get the "click" at the end of travel.

Check to see which you have by dry firing the gun, and then pulling the trigger again. If it doesn't move, you have a dead trigger and target transitions are going to be out.

If your gun doesn't deactivate the trigger mechanism after dry firing, you can still dry fire because the trigger moves and therefore, you can do all the dry firing you want and thus target transition drills.

Of course, people of culture and taste in firearms, meaning those who prefer revolvers and DA/SA pistols, don't have to worry about such things, but that's a discussion for another time.

So, if you can actually do one as a dry fire drill, find a basic target transition drill. El Pres and the Vice Pres are not necessarily the best choice (both exercises involve a reload and are classically done at 10 meters) so something a little more basic is a better choice.

Find a simple exercise that transitions between targets; there are plenty out there. Picking three and putting one shot on each works pretty well, but you can pick any suitable target transition drill.

If your handgun allows you to, transitions are an excellent addition to a dry fire training routine.