Bear Spray Vs. Gun: Which To Carry In The Woods?

Bear Spray Vs Gun: Which Is More Effective

The available evidence we have on bear spray vs gun indicates bear spray, as a general rule, is more effective...until its not. It also depends on what kind of gun you're talking about.

So, when people ponder this question, what they actually mean is "bear spray vs a handgun." To flesh that out, what they really mean is should you carry a powerful pistol as a personal defense weapon in bear country? Should you invest in a big ol' .44 Maggie and a chest holster to go with it?

Again, the evidence indicates that bear spray is powerfully effective...but IF it fails, and it has, a gun can be an effective backstop. Let's talk about that a bit more. 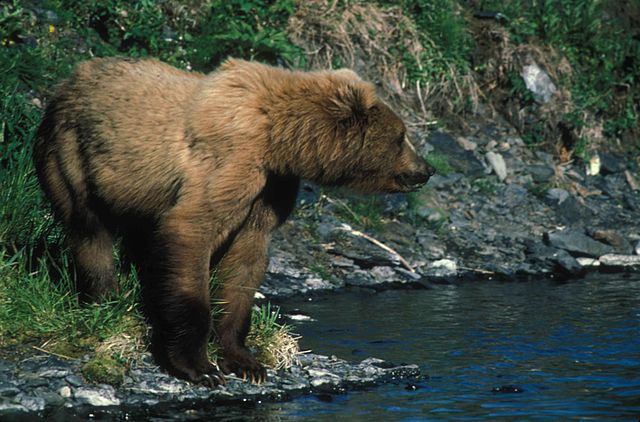 We all know that handguns don't really have stopping power, which is why long guns make the best bear guns.

I'll put it this way. David Petzal, Rifles editor for "Field and Stream," was once asked about bear guns. He wrote that he didn't put much stock in handguns. He recalled a Canadian guide's story where he and a client encountered a hostile grizzly. The guide shot at the bear with his hand cannon, and missed. The only thing that saved his bacon was his fast-acting client, who had a ".338 Winchester Magnum and knew how to use it."

The link escapes me, so you'll have to take my word for it.

He also points out - as a number of other authors will - that guides in Alaska, as well as in the arctic, pack properly big rifles in case of large bruins. A 500 lb+ bruin is nothing to take chances with and the only thing that does for Yogi, as with any other large critter, is to spank him with a whole lot of lead.

Don't believe a word of what they say about .45 caliber. It's all bupkis.

Petzal (and, again others) notes that most guides usually have a .375 H&H Magnum at minimum, with .416 and .458 Remington Magnums being popular as well.

For you lever-gun addicts, .45-70 also makes a dandy bear rifle.

The Department of the Interior is also known to issue 12-gauge shotguns and 3-inch slugs.

So really, if the question is bear spray vs ALL guns...guns would win. The aforementioned rifle calibers are used to kill elephants, though the .375 H&H and .45-70 are thought of as being not quite adequate for the task for one and - in some jurisdictions in Africa - not even permitted to be used to hunt the largest game as a result.

How Effective Is Bear Spray? 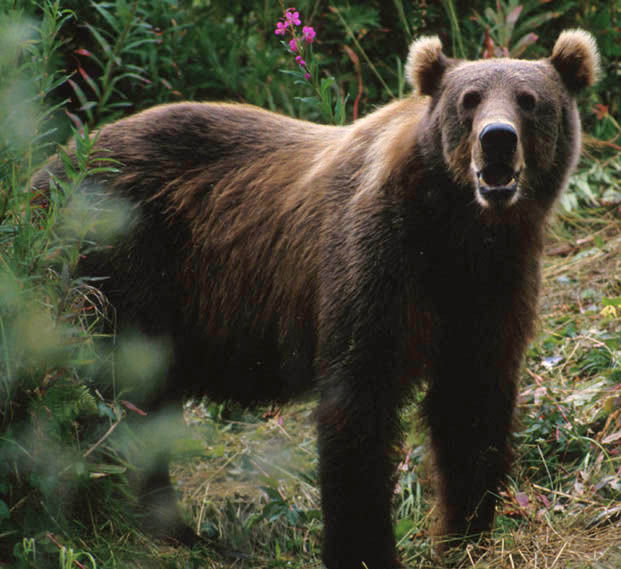 So, how effective IS bear spray?

Well, let us consider what bear spray does. Bear spray is a strong(er) pepper spray, the active ingredient of which is capsaicin. Capsaicin is an irritant, affecting the eyes, nose, skin, mouth and upper airway. The more sensitive a creature is in those areas, the worse it will be affected by pepper spray.

A human has about 5 million olfactory receptors. A bloodhound has 200 million to 300 million, and has an olfactory bulb - the lobe of the brain that registers scents - forty times larger (relative to the size of the brain) than humans. Between the scent receptors, olfactory bulb, and overall surface area of the nasal mucus membrane in bears, their sense of smell is seven times that of a bloodhound.

In mating season, males can detect females in estrus from 20 miles away. Polar bears have been known to pick up scents of food sources from upward of 100 miles.

What that means is that bears are WAY more sensitive to this kind of irritant.

What about in the field?

According to a study in the Journal of Wildlife Management, an analysis of more than 80 bear encounters, including 70 bear encounters involving defensive use of bear spray in Alaska. 92 percent of brown bears, 90 percent of black bears, and 100 percent of polar bears (only 2 incidents) were stopped or dissuaded by the spray. 98 percent of humans carrying spray in the study were uninjured.

The US Fish and Wildlife Service reports that their records indicate people who defend themselves with a gun against a bear have an injury rate (meaning the bear mauled them to some degree) of about 50 percent.

In other words, there's a certain amount of evidence that bear spray is not only effective, but might be more effective than a firearm...though you should take those figures with a good dose of salt.

A few different studies have weighed in the bear spray vs gun debate.

A related study also appearing in the Journal of Wildlife Management and sharing two authors with the above study in that publication, looked at use of firearms against bears in a self-defense role. That study found bears were killed in 61 percent of cases, but that injury rates didn't change with the type of firearm used.

However, those two studies have caused a certain amount of controversy. It's been pointed out that the studies that appeared in JOWM don't discriminate between an aggressive bear and a non-aggressive one; the authors just looked at bear encounters as whole opposed to actual bear attacks.

According to the Anchorage Daily News a 4-year study from California's Sequoia National Forest found that rubber 12-gauge shotgun slugs were a more effective black bear deterrent than spray or any other non-lethal method.

So what's the bottom line here?

There are a few takeaways.

First is that bear spray works up to a point. It isn't clear if there are conditions under which bear spray fails; wind doesn't seem to be a factor, but the disposition of said bruin might be. In other words, does bear spray work on an angry or hungry bear compared to a bear that's just nearby?

That isn't known. What IS known is that a gun does work in those circumstances.

What's the best thing to do, though?

Follow best practices for traveling through bear country. If camping in the wilderness, keep a clean campsite. Make sure all food and waste is suspended in mid-air and well away from your campsite. If you live out in the boonies, keep trash secured.

If you see a bear anywhere near you, make noise at it and try to convince it to go away.

As to whether you should carry a gun or bear spray...ultimately that's your decision. A good practice would be to carry both...and make sure you practice with both.

As to what guns to carry, black and brown bears have been killed with everything from .22 Short (Google "Bella Twin" and be amazed) to 9mm and certainly the larger rifle calibers. But there's a huge difference between merely killed and stopped. The former requires good aim, the latter some real horsepower.

As to handguns, .357 Magnum and 10mm are a bare (ha!) minimum. .41 and .44 Magnum, and .45 Colt +P are decent selections as well. Bullet selection is critical; bears have thick hides and heavy bone structures, so JHP is out. Hardcast solids, jacketed flat tops and semi-wadcutters are better choices. Larger handgun rounds such as .454 Casull, .460 and .500 S&W Magnum, .475 Linebaugh, .500 Linebaugh and .50 AE are also worthy choices, with good ammunition selection.

If carrying a long gun, 12-gauge slugs (3" or 3-½") are a worthy choice, but get the heaviest you can. Brenneke slugs are said to be a common choice for a bear defense shotgun. As to rifles...again, there's a difference between "killed" and "stopped." A .338 Win Mag is a good starting point, though guides opt for properly big rifles.

However, the available evidence also indicates that people who practice proper bear awareness and follow best practices for being in bear country tend to rarely, if ever, have any problems.

← Previous Next →
5 Comment(s)
Hazelwood A. Woody
Liberals like you and your animal loving kind are the reason a lot of nature people are killed every year here in MT. because they believe the stupid people in the world that say things like you have in this piece you have written!!! I guess you have never heard of the 460 Rowland or the 10mm using Underwood ammo and the ballistics that these weapons have??? You need too do better research when you think you know what you are talking about!!! We just had too people mauled because their BS didn't work in either one of theses case's!!! Like Forest Gump said STUPID is as STUPID does and you have JUST reveled who you are!!!! Professional gun and ballistics expert!!!
Reply Sep 21, 2019 15:17
No Powder
In my experience, which is extensive. I spent two weeks camping in Boundary Waters in northern Minnesota and saw three black bears while there. I found that the best defense is simply being aware of your surroundings and paying attention to indicators of bear presence.

It is also helpful to make a bit of noise as you trek through the wilderness. Our guide recommended we wear little brass bells around our ankles that would chime with every step. He did, also, suggest we carry pepper spray.

As for indicators; he was particularly helpful in pointing out that black bears typically eat things s like nuts and berries. So, when coming across bear scat, if you see little pieces of undigested blue berries and pieces of acorn you can be pretty sure there are black bear in the vicinity. However, if the scat has little brass bells in it and it smells like pepper spray? That’s a sure indication that there are Grizzly Bear nearby and maybe you should be thinking about finding a different campsite.
Reply Sep 21, 2019 07:16
Dr. Strangelove
I've read numerous articles at sites like All Outdoor and Ammoland about documented, successful defenses against bears with handguns, even as small as 9 mm.
Reply Sep 21, 2019 03:25
Jack Baker
When you are in bear country you are supposed to carry a whistle and pepper spray to distract the bears. It is necessary to identify what bears are in the area. This is easily done, you have to look at the bear scat. If it has berry's and foliage in the scat, this indicates that there are black bears in the area, To identify if Brown Bears (Grizzlies) are in in the area, the scat will have pieces of whistles and busted cans of pepper spray in it...
Reply Sep 20, 2019 17:31
Steven Segura
Take both the Gun and spray so If your gun doesn't work you can spry yourself with the spray in hopes that the bear doesn't like their food hot or so that the Rangers can follow the bear spray smelling poop to find the Bear later.
Reply Sep 20, 2019 10:25