New Year's Eve is one of my favorite holidays. It's an excuse to hang out with close friends and celebrate the dawn of a new year. People have their traditions and things they generally like to do on New Year's. Whether it's going into town to see the fireworks or going ice skating at midnight, there's a lot of fun to be had.

Being a concealed carrier means we have a responsibility to keep straight the entire evening.

While it's awesome to let loose, maintaining situational awareness is a must. Why? Because as much as we're looking forward to a new year, there may be others out there who are less concerned.

Violent criminals prey upon weakness and they look for any excuse to exploit others into dangerous or compromising positions. Keeping your wits about you is the very first step to avoiding this style of confrontation. In this article, we'll go over a couple ways to keep the night what it should be – fun and entertaining.

Have a designated buddy

Whether it's another concealed carrier or just a sober mind, it helps to go into these sorts of events with another set of eyes and ears. It's just one more way you're keeping on top of situational awareness. Does it mean neither of you can have fun? No, you haven't been deputized into the “fun police” by being responsible – you're just staying on top of the situation.

If it's 2 am in the morning and all the crazies are pouring out of the bar, make sure to separate yourself from the crowd. Dumb things happen when the crowd is both unruly and drunk. You don't want to get caught in the mix, especially if you are carrying concealed.

Avoid The Rowdy Drunk... Walk Away

People overindulge. It's one of the side-effects of this holiday season. And when some overindulge, they tend to get rowdy or boisterous. Whenever possible, if possible, let them sleep it off. If the person is in your company, reign him in. Your job is to protect yourself, not get caught up in somebody else's drama. Take a look at our article about ccw and alcohol.

When the night has dragged on too long or you see a cause for concern, trust your gut that the night's through. It's better to call it in early than to have to deal with unnecessary difficulties later on. If you find the crowd is starting to turn unruly or there's individuals in their midst that may provoke or cause a bad situation, go ahead and bow out. A decision made even wiser if you're able to extract your party without any losses. 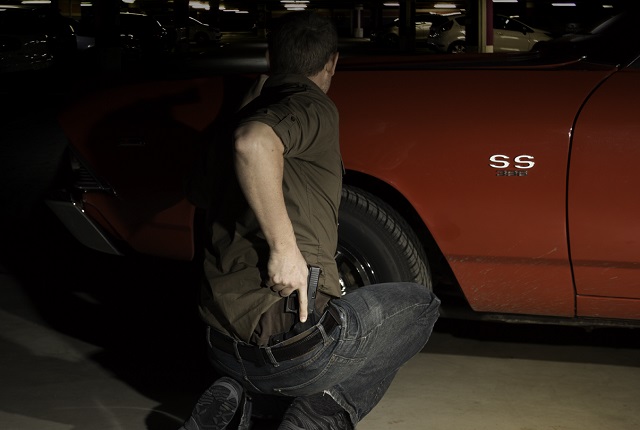 The best laid plans of mice and men all seem to fall apart in the pale moonlight of reality. If hostilities erupt, set up your defenses. Staying aware of entrances, exits, and potential places to move to cover are all great things to keep in mind. Concealed carriers often train for standing out in the open and shooting at targets.

Taking cover, in an actual gunfight, will keep you alive longer. Bullets hurt, bullets kill. Keep your pistol holstered in its concealed carry holster until you need it and, if you do need it, make sure you're taking cover and aiming judiciously.

← Previous Next →
2 Comment(s)
Aardvark
Good advice sir Jim. As I get older, I have found less reason to drink and more reason not to. Since I do conceal carry, I would not allow myself to have even one sip of alcohol. I know you covered a lot of material in this article, so I would just like to add for people to be VERY aware that bullets can go through people, walls, car doors, etc. These facts should be considered whether you are firing at a thug (where innocents may be behind the perp, in other rooms, or down the street), or whether you are taking cover from a thug. The photo of the guy covering behind the engine and wheel of a car is a good example of good cover.
Reply
ALex Belot
These are all great advice as a reminder to our conceal-carrying brothers and sisters. It's true, we need to finish the year with a bang (no pun attended...), but we also need to stay alive and safe till the next year.

God bless and hope you and the entire staff have a safe and happy new year.
Reply