Can You Concealed Carry At A Concert Event? 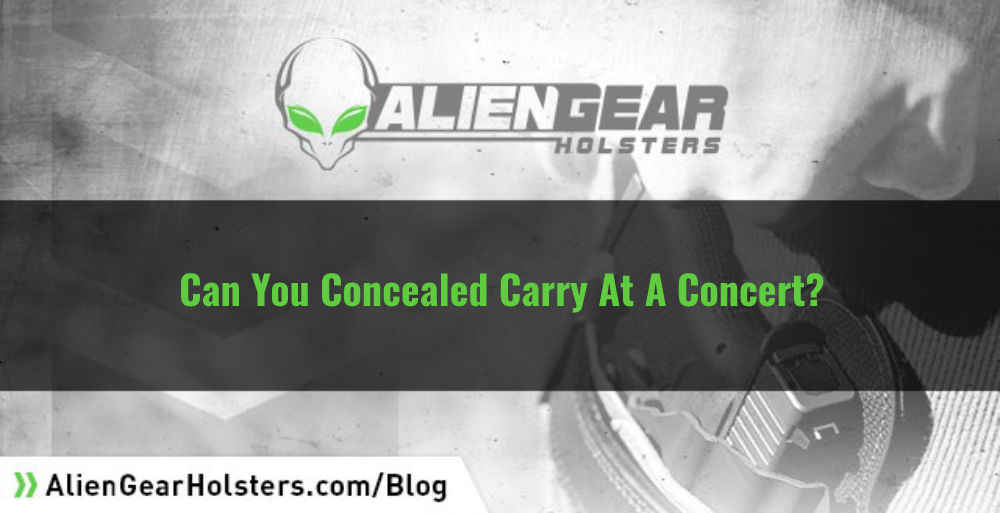 Concealed carry laws tend to get in the way of everyday life for everyday carriers.

Working with gun laws as a lawful gun owner is just part of the process. The issue with answering whether or not you can concealed carry at a concert is that music venues shift between different locations, buildings and owners.

There is no definitive universal answer to this question, but there is a definitive process of finding out local and state concealed carry laws to determine whether or not one can carry at a concert.

Steps To Determine If You Can CCW Carry At A Concert

Not to oversimplify the process, but ask yourself a series of questions if you're curious about your ability to carry at a concert.

Where is the concert being held?

Is it at a stadium, and is that stadium public or private land?

Is it on a college campus?

Is it in a public place or at a public gathering?

Is it at a casino?

Is it in a city park?

Is it in a federal facility where federal employees are located? (Slim chance here, but it's worth mentioning.)

Are you open carrying or carrying concealed?

Not all states are like Washington, wherein RCW 70.108.150 states, "It shall be unlawful for any person, except law enforcement officers, to carry, transport, or convey, or to have in his or her possession or under his or her control any firearm while on the site of an outdoor music festival." There is also a statute concerning liquor licensing, though we'll touch on that in a moment.

There are state governments that restrict concealed carry at stadiums and arenas.

Many statutes won't outright define policy on concealed carry at music festivals, venues or concerts, but they will have laws on publicly accessible locations.

Events funded and organized by local governments like street fairs and festivals may often have stipulations.

Local ordinances may prohibit weapons in locations like city parks — unless the state has preemption laws that restrict local governments from enacting firearms laws.

Casinos are popular venues for concerts, but many state laws outline that concealed carry is restricted or prohibited in casinos.

Government funded or owned venues may either allow concealed carry or restrict it with state-mandated signage. Alternatively, privately owned venues in many states have the ability to restrict firearms on their premises, with or without signage depending on the state.

Because it varies by state, if signage doesn't have the weight of law, concealed carriers may still be asked to leave the location by the owners, and the concealed carrier may face trespassing charges depending on their response and potential refusal to leave.

Does the venue serve alcohol? And will alcohol be allowed in the concert stands/near stage? And do you plan on drinking at the concert?

Many state laws will prohibit firearms in portions, or the entirety, of a location with a liquor license. There will be state laws on carrying while intoxicated — let alone contested viewpoints in the public about how much is too much while carrying. Many argue for a designated carrier, just like a group would have a designated driver.

There is, of course, the issue of a group being split apart.

Do you have a CCW permit? States will have different statutory liberties assigned to concealed weapon license holders that may allow gun owners to carry in more locations.

Call the venue. Call the police department respective to the county the concert is in. If it's out of state, make sure your nonresident concealed carry permit is recognized through an interstate reciprocity agreement.

Look into whether or not there will be a security pat down prior to entry, because that could be a key indicator of whether or not the organization will prohibit firearms on the premises. Again, it may be the case that concealed carry permit holders will still be able to carry on location past security, depending on the state, venue, property owners and concert coordinators.

Make prefatory concealed carry compliance and research a part of a travel plan to the concert.

Even if concealed carry is allowed on location, the musician can cancel because of that.

Concealed Carry At Concerts Has Caused Musicians To Cancel

Can a venue's headliner cancel because of concealed carry at a concert?

Take Ray LaMontagne for example. He canceled his nearly sold-out show at the University of Texas after the state enacted campus carry in late 2016, according to local media reports.

Firearms were prohibited at the WWE SmackDown event in January of 2016 at the Laredo Energy Arena in Laredo, Texas, according to 2016 reports.

HB 910 allows open or concealed carry with appropriate licensing on private property unless the property owner restricts carry on the premises under Section 30.07 of the Texas Penal Code.

A Jamey Johnson concert was canceled this summer at the House of Blues in North Myrtle Beach, South Carolina when the country singer's team clashed with venue owners. The team was told that, like the public, they weren't allowed to carry weapons backstage.

The headlining hours were canceled after escalated conflict, according to the Rolling Stone.

Concealed carry at concerts is a polarizing venue owners deem a privilege. Make sure to take the appropriate steps beforehand to make your trip go as smoothly (and lawfully) as possible.

Looking for more information on your carry? Check out these related blogs: