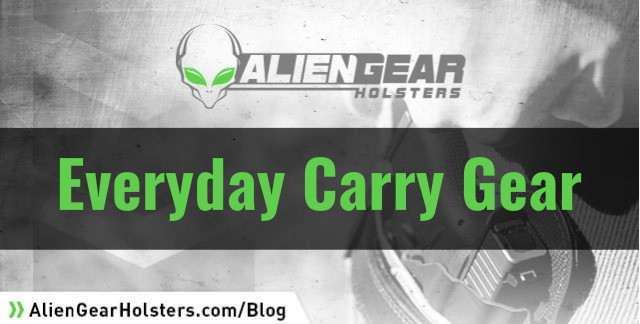 What Everyday Carry is and Why it Matters

An everyday carry set up is dictated by personality. It's rarely one size fits all.

A community has gathered around sharing what they carry in their pockets and bags on a daily basis. However, there are environments, situations and lifestyles that will affect what is carried and for what reason.

EDC setups generally seem to have a few core items, but choices vary because of those factors. Here are a few that tend to be more common.

Minimalist EDC gear strips the excess and focuses on function. Often, it's a simple combination of wallet/money clip, keys, phone and knife — or even a smaller pairing of those listed items.

Yes, there are tactical handkerchiefs floating around out there.

The key to minimalist EDC gear can be found in the ideology behind minimalism: deliberate meaning through material, not overt possession. The idea isn't to strangulate the number of one's possessions, but to derive and wring purpose from only what's needed.

EDC, then, is the paraphernalia of day-to-day living, an expression of tools and objects that support independence and eschew reliance.

Take for example this police record from the year 1772 in The Public Advertiser: "STOLEN out of a lady's pocket last night at Covent Garden Playhouse, an old-fashioned silver watch, maker Peter Le Conte, no.9, with an old brown chain, a small pinchbeck seal (impression: a woman' s head), steel key and hook."

This eighteenth-century woman represents minimalist EDC: a watch on a chain, a key, a hook and a seal. She's a worthy representation of the practice that's often espoused by middle-aged men proudly carrying only a holstered subcompact pistol, money clip and a single key.

EDC gear, however, doesn't have to be restricted and it often benefits from a specific plan of action.

EDC tools have always been chosen for purposeful need. It's not just a hodge-podge of similarly colored tools people carry around for no reason. People feel vulnerable without their day-to-day items.

Take for example that many guys and gals leave the house with a similar ritual — a quick tap of the pockets for phone, wallet, keys or any other accoutrement to make sure they're ready for the day.

The items carried throughout the day are responsive to environmental or personal need, like an umbrella in torrential rain or a nicotine lozenge for smoking cessation.

Theresa Tidy wrote a book, Eighteen Maxims of Neatness and Order, in 1819 that on page 26 speaks about how a proper lady should "sally forth" into the day.

"It is also expedient to carry about you a purse, a thimble, a pincushion, a pencil, a knife, and a pair of scissors, which will not only [be] an inexpressible source of comfort and independence, by removing the necessity of borrowing, but will secure the privilege of not lending these indispensable articles," according to Tidy.

Not everyone sets out every day to be a proper 19th century lady, but the point still remains: there are tools that are committed to situational need.

Hot weather EDC set ups may include chapstick and a small vial of sunblock. Cold weather EDC may have pocket warmers and spearmint candy canes.

When it comes to utility on the job, a purposeful EDC setup will not only make life easier, but also improve versatility to get the job done right.

Not to sound like a broken record, but EDC essentials will depend on individual needs on the job and in varying environments.

Think about reconnaissance teams in Vietnam. A record by Gordon L. Rottman, US MACV-SOG Reconnaissance Team in Vietnam, references 18 itemized pieces of equipment, some pieces stored in extra pockets sewn onto one of the men's sleeves (One-Zero John Plaster).

It included a wrist compass, a pilot-type pen flashlight, a pocket knife, a whistle, some anti-malaria tablets in a plastic bottle, a notepad and pen in a plastic bag and other useful gear.

Professional EDC gear will include trade-specific, industry-standard tools and equipment, or even something small and idiosyncratic that one has found works well to fix one thing or another.

Formal EDC essentials also have that utility: watches, combs, cologne, grooming tools, low profile knives, a tie bar, glasses and other lightweight objects that can slip unnoticed into a coat or pants pocket.

With the proliferation of entrepreneurship, more and more niche, specialized equipment is being made that not only appears aesthetically pleasing, but also gives a tactical advantage. Tactical pens and flashlights are just a couple examples of this.

Parental EDC items could very well be considered tactical advantages. That miniature bottle of baby powder or those spare diapers, for example, will undoubtedly save the day. Pizza delivery guy? A fanny pack with extra crushed red pepper and parmesan could mean the difference of a few extra dollars in tip money.

Camera crews? Kimwipes and camel-hair brushes for glass, a small air pump for sensors with dust from lens changes, a paracord bracelet connected to gear in case it slips out of the hand, a lens bag to protect that 35mm or 85mm prime they couldn't just leave at home.

Hikers? Better believe a durable water bottle is nearby in a bag with snacks, something with GPS, a first aid kit, extra clothing and so on.

Everyday carry doesn't have to be static. No matter what people think, the general public is always practicing EDC.

With that said, what is your everyday carry gear? Comment below or share a picture/comment on social media showing off all your carefully chosen gadgets.

My name is Molly and I work with LaserGear, a leading supplier of laser marking systems. We are looking to interview industry experts for a blog post on our own site, and we felt that you would be a great resource on the subject matter. Your Q&A would be featured on our site and also shared on our social media outlets. If you have any questions or require additional information, please feel free to reach out.