How To Maintain A Holster 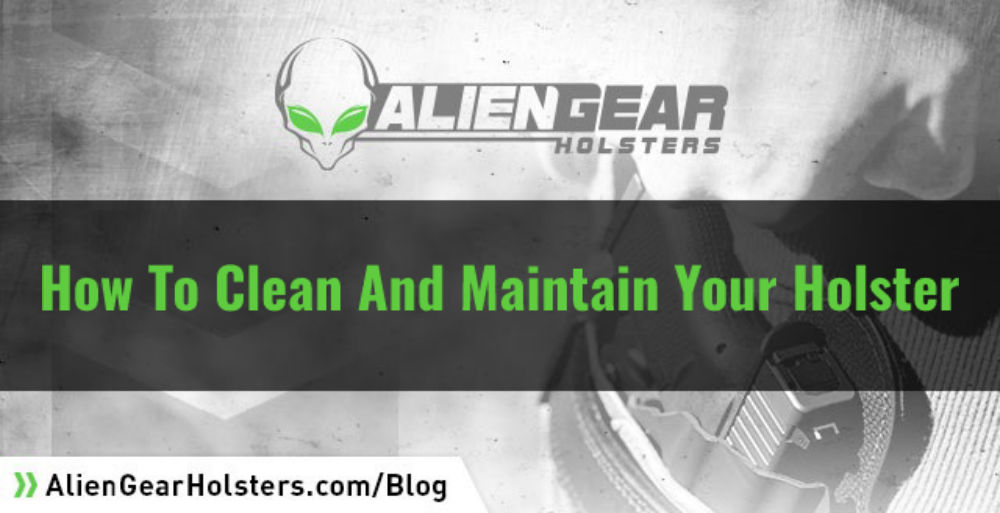 Holsters smell. They get dirty. Sweat builds up. Dirt collects. Dust works its way in.

If firearms are devoutly cleaned after use, and clothing is (hopefully) washed and repaired after worn, why should holsters be any different?

Clean your holster before it gets rank and maintain it so it works as designed.

The Process of Cleaning a Holster

It's a simple process to clean a holster with a neoprene backer that sits directly against the body.

"A lot of the customers after they wear their [Cloak Tuck] 3.0 after awhile, they'll notice it kind of gets smelly or there's a sweat build up, crusty with salt," Alien Gear Holsters customer service representative Carri Banister said. "Some customers ask if they can just throw it in the washing machine."

Instead, dab some dish soap onto the neoprene and gently rub it into the dirty area.

Then, take a damp cloth and wipe off the soap residue.

Let it air dry, or use something like a hair dryer at low heat if in a rush.

For holsters with leather backers, saddle soap should be used on the front and back instead. It contains mild ingredients like lanolin and preservatives like beeswax.

How often does a holster need to be cleaned though?

"If they wear an undershirt, it's going to be mitigated quite a bit, but if it's up against their skin, then they should probably wash it," Banister said. "It really depends on the person and how much they sweat, more than anything else. Some customers have gone two years without even thinking about cleaning it."

It's similar to work-out clothing. It's a matter of hygiene.

There are more than hygienic benefits though.

Maintain your holster by routinely wiping out the shell and keeping the threaded screws in working condition.

Not cleaning the shell may have an effect on the firearm's finish.

"One of the things when we're processing warranty replacements, returns and exchanges, if you take off the shell, you'll notice a lot of dust in there," Banister said. "Dust can be one of the main causes of increasing holster burn and scratching your firearm."

Be mindful of the point of contact between the shell and the handgun.

Debris may find its way into that space and wear down the slide with time, due to the natural friction between the handgun and holster when holstering and drawing.

"If you’re a farmer haying in the field, there’s going to be a lot of dust that accumulates inside the shell that you're going to need to wipe up more frequently than if you're just carrying in an air conditioned office," she said.

When installing the shell on the backer, be sure to check that the screws remain in place, something that Loctite will help reinforce. However, the ShapeShift 4.0 IWB Holster completely removes the need for Loctite by implementing a tool-less system. Its belt clips and holster shell have zero metal hardware that have the possibility of backing out.

There's no getting around it.

A holster is going to be affected by everyday carry.

Don't forget. Every Alien Gear holster comes with a Forever Warranty. If it's beyond cleaning, give customer service a call. They will sort out its replacement as soon as possible.

Cleaning a holster will take five minutes. Wiping out a shell? A few moments.

Doing so will save your bacon in the long run. Or at the very least make you smell better.