The 7 Best Concealed Carry Revolvers You Can Get Right Now

Want The Best Concealed Carry Revolver? Check Out These 7 Examples

We can't settle which one really is the best. We can, though, show you some of the most popular examples and tell you why you should look at them if you're looking into getting a concealed carry revolver.

Ultimately, the best revolver for concealed carry is the one you like most, but these following 7 pistols are some of the best available.

The Ruger LCR established itself as one of the best concealed carry revolver pistols out there. While Ruger has previously been known for its big wheel guns, it turns out their smaller ones are pretty darn good too.

First, they're light. The LCR has a polymer lower frame and aluminum upper frame, reducing weight to 13.5 ounces for most models, so they're easy to pack. Second, the user manual is pretty thin as the LCR is as user friendly as it gets. The LCR is DAO, with a smooth trigger pull made possible with a friction reducing cam trigger design. A bit more pressure is required to squeeze to discharge, but you don't get the stacking with other triggers.

It's as simple as load, point and squeeze until empty. Reload, repeat. Don't like the DAO system? Check out the LCRx, which has a low-profile hammer.

CHECK OUT OUR RUGER LCR HOLSTERS!

If you want to carry a classic concealed carry revolver, look for Colt Detective Special or Cobra revolvers. The original Cobra looks just like the Detective Special, but the frame is made from an aluminum alloy. The difference between the two is about 6 ounces of weight.

The Detective Special was a perennial favorite of plainclothes police officers and uniform cops for use as a backup gun or for off-duty carry. Civilian carriers took to it as well.

The Colt snubbies were known for being slightly larger than the J-frame Smith and Wessons, being about halfway between a J-frame and K-frame in size. They also hold six of .38 Special rather than five, so you do get one extra in case that counts for you.

Why bother with such an old gun? A few reasons. Well, the thing is that .38 Special isn't too hard on guns, so an old gun in good shape will still be a viable carry gun. Also, Colt revolvers are just cool.

You'll probably be able to pick up a Cobra for a bit cheaper, but good deals are out there. Just be cautious about +P ammunition.

There are a whole lot of J-frame revolvers out there, and one of the best to acquire is the Model 637 Airweight. It's the classic J-frame revolver for concealed carry - five shots of .38 Special in a compact, concealable package. It's double-action, with a hammer to thumb back in case you don't want the longer, harder trigger pull.

The 637 is lighter than many revolvers, made with an aluminum alloy rather than steel to save weight. It tips the scales at a svelte 14.3 ounces unloaded, so it's easy to tote. The modern version will digest +P, but as always consult the owner's manual about use of overpressure ammunition.

You'll find it in most gun stores and retails for $469 MSRP, so it will be reasonably acquired. This is the CCW revolver by which all others are judged. You could get one that's worse, but you'll be hard pressed to find one that's better with all factors considered.

CHECK OUT OUR S&W J-FRAME HOLSTERS! 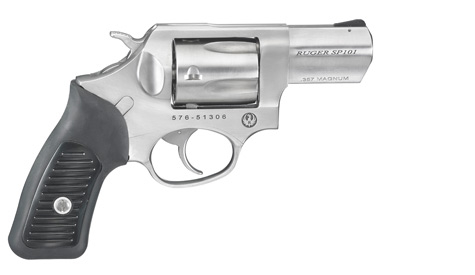 The Ruger SP101 is one of the few snubbies that's built to handle .357 Magnum from the ground-up. It has a beefier frame than most five-shot revolvers, including a thicker top strap. There is a slightly longer grip as well. Additionally, and this is an aspect that matters when it comes to magnum revolvers, the cylinder is triple-locking, latching in place at the cylinder, and at the bottom and top of the cylinder crane. The barrel also sits in a full shroud.

The stronger latching system and beefed-up frame come at the cost of weight, as the base model weighs in at 26 ounces. However, anyone who has actually SHOT a .357 Magnum snubby knows that it just hurts. A bit of extra heft, therefore, is actually a good thing.

The SP101 has some options, though. You can opt for 2.25-inch, 3-inch or 4.2-inch barrels and there are multiple calibers available including .38 Special and .327 Federal Magnum. There's also a 9mm model with a machined cylinder face for using moon clips. Granted, entry price is a bit stiff (expect to spend around $600 or more) but remember that this is a Ruger. It's a tank. With basic care, it'll last the rest of your life.

The Taurus 85 is a popular concealed carry revolver, but the Taurus Poly Protector line offer some refinements that you may not want to ignore. Much like the Ruger LCR, it features a polymer lower frame and alloy upper frame, shaving weight from 21 ounces in the standard 85 to 18 ounces. Not a lot, but enough to notice.

There are a few different models, but you can choose from five shots of .357 Magnum or five of .38 Special. The Poly Protector series also feature a half-shroud for the hammer, reducing its overall profile and making it easier to draw from concealment. A fiber optic front sight is added to make target acquisition easier.

Easier to carry and optimized for use when it counts. MSRP starts at $379, but you'll be able to pick them up for less. That makes this one heck of a bargain gun.

Yeah, we're including a second J-frame...but that's because the Model 638 kind of deserves it. Ever since it was introduced back in the 1950s, this has been one of the best concealed carry revolvers available and remains that way for good reason.

The Model 38 Bodyguard introduced the shrouded hammer. The external hammer is retained, so it can be thumbed back if needed. However, the shroud keeps it from snagging when being drawn, so it's ideal for concealed carry use. It carries five of .38 Special, like most other J-frames. However, the Model 638 is made of a lightweight aluminum alloy, weighing only 14.6 ounces.

MSRP is $469, and like the 637 can be found in most gun stores. Like the 637, the Model 638 J-frame is the standard by which all other snubbies are judged. You just can't go wrong with this one.

CHECK OUT OUR S&W J-FRAME HOLSTERS! 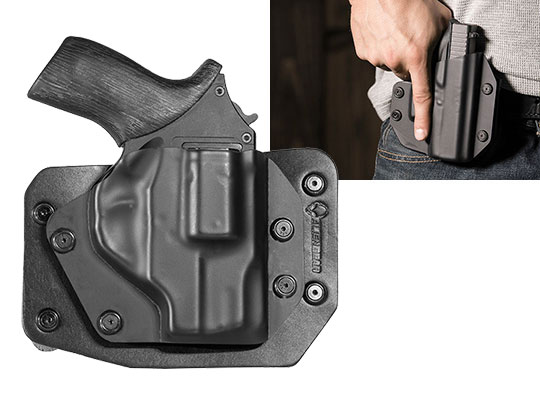 The Chippa Rhino is arguably the most original thing to be done in wheelgun design in living memory. Some love 'em, some hate 'em….but you can't deny that it's an original.

The Rhino was designed in part by Emilio Ghisoni, inventor of the Mateba Autorevolver. Ghisoni, an engineer by training and a keen target shooter, installed the barrel on the bottom of the frame instead of the top when inventing the Mateba. This projects the recoil force straight back into the hand rather than the barrel sitting above the wrist, thereby creating a moment arm and subjecting the wrist to torque. That's what basically every other pistol on earth does, and since reducing recoil aids accuracy...so much the better.

The result is that it's easier to shoot .357 Magnum and other powerful rounds, which many owners and reviewers have noted about the Rhino. Sadly, Ghisoni died before the Chiappa Rhino could really take off, but it's established a niche for itself. The 200 series has a 2-inch barrel, and the slab-sided cylinder holds 6 of .38 Special or .357 Magnum.

The novel design comes at a price - MSRP is over $1,000 but in-store is $750 to $800 for the basic black edition - but what you get is snubby revolver that most owners and reviewers run as well as a full-size.

CHECK OUT OUR CHIAPPA RHINO HOLSTERS!

← Previous Next →
6 Comment(s)
GREG
The Taurus 856 is a good choice & my personal carry piece. With it's all steel construction it's a bit heavier than the polymer snubbies, but it has comfortable grips, an excellent trigger, & a six shot cylinder. Most snubbies are only five.
Reply Feb 27, 2020 21:12
Gary Dayton
Chris, I used an ankle holster with my backup colt detective and also later I tried with the colt agent 38. Not conducive to chasing suspects. Haven't used again.
Reply Jun 08, 2019 15:48
Chris
Do you guys carry ankle holsters for any of these revolvers? I tried and couldn’t find them. I have an OWB and IWB for my XDs 4” but it’s not an option for ankle carry so I want to switch to a revolver and stick with alien gear.
Reply Apr 10, 2019 06:07
Lorna Thompson
I'm intetested in your Ruger LCR , I have a very small hand and the Ruger 380 with lazer my daughter bought me last christmas is too hard for me to pull back the slider part and only half my trigger finger can grip the trigger , I have only shot my gun once at a range my son took me to to teach me how to load and use the gun .
I'm looking for a very light weight small revolver snub nose type gun and liked what you had to say about the Ruger LCR . Any advice would be appreciated , I'm on a very fixed income and will be looking around for the best prices or possable trade , I don't yet have my concelled licence permit but my 380 is regestered and accquired legally in my name with the usual background check approved before I could take posession .
Reply Feb 21, 2019 00:28
Craig Giddens
The next to the last snub is a 442 ... not 638.
Reply Jan 30, 2019 10:28
Craig Giddens
Where it says 638 J Frame ... shouldn't that be 442?
Reply Jan 27, 2019 18:40
Load more comments