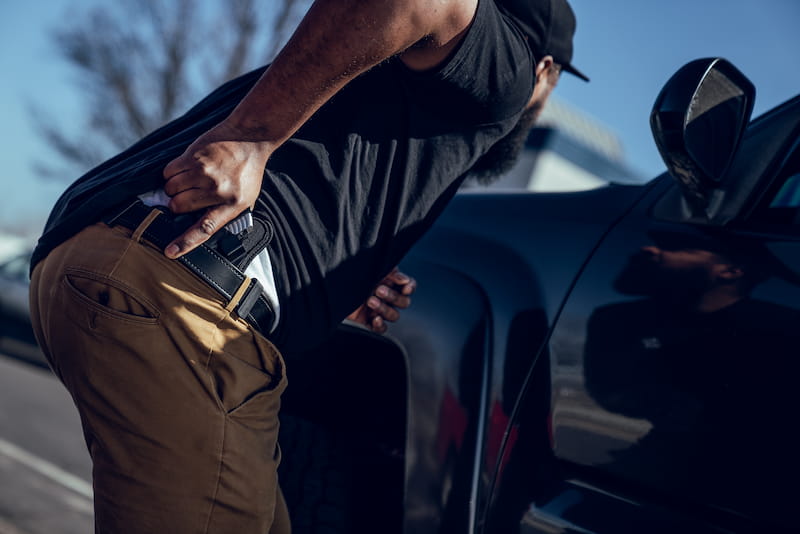 What’s the best caliber for concealed carry according to police officers? This may be the second most common question I have received after “Have you ever had to shoot anyone?”. This is probably one of the most hotly debated questions and ranks up there with the great ongoing “Glock vs 1911” debate. While it may seem like a complicated topic, as a retired police officer I can say that my advice is always the same and it is always simple; choose the gun that you will actually carry.

Selecting a duty gun and a concealed backup gun was one of the first decisions I had to make when I was hired on to the department. Since my father was a police officer, I looked to him and many of his contemporaries for advice as I began my career. Most of my professional decisions were made through that lens and choosing a backup gun was no exception. One thing that stuck with me was being told that a backup gun is useless if you don’t carry it so whatever you buy, make sure you buy one you will actually carry.

This point was driven home even further when I was a few years into my career and beginning my time as a field training officer I met a rookie on our department and asked him if he carried a backup gun. This young officer said that he owned one but that he did not carry it because he wasn’t used to having the weight on his ankle and didn’t want to make a mistake while in training. It struck me that he bought a backup gun but didn’t pick a gun he was comfortable carrying all the time.

After years on the street responding to calls and many a conversation with other officers about their experiences, one of the things that stuck out to me was that we had seen people survive hits from a .357 Magnum and a .45 ACP and seen a .380 and .22 be fatal. It also brought back something a salty veteran once said which was “I would carry a Howitzer on my hip if I thought I could get a holster for it”. Artillery comes in incredibly effective calibers but is just as incredibly impossible to carry.

This showed me that the debate over caliber, while it has its place, may be secondary to the question of proficiency with a weapon and ability to deliver effective rounds. It drove home the concept that having a firearm you were consistently willing to carry and be accurate with were two important considerations often overlooked in firearm selection.

The question is then “What good is any firearm if you don’t have it when you need it or you are not proficient with it when the time comes?”. Whether you’re a Bond fan who is deadly accurate with a Walther PPK/S or a wheel gun man who prefers the reliability of a 5-shot snub nose, both types of people will be ready for whatever comes their way because they will be carrying their weapon and be competent when it is time to use it.