Which Sig Sauer Concealed Carry Guns To Look For

There's no doubt that Sig Sauer makes some of the finest pistols available, but Sig Sauer concealed carry is not necessarily an easy proposition with some of their larger offerings. Let's face it - not everyone wants to conceal a service pistol everyday.

For the person who wants to carry a Sig, there are some models better suited to daily carry than others. Here are the concealed carry Sig guns to look for...

The P320 XCompact takes the P320 and adds some bells and whistles that add up to significant improvements over the base model. The flat blade trigger improves the trigger press, and a reduced-radius frame with a longer beavertail makes the gun far more ergonomic.

Add in standard night sights and a milled slide that can mount an optic...the gun is basically perfect out of the box. 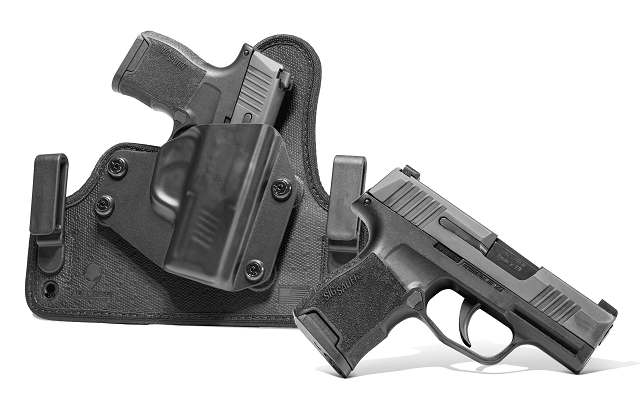 Sig Sauer created a monster in the Sig P365, which quickly became one of the most popular concealed carry pistols on the market. The P365 is one of the few guns that has almost no downsides to owning and carrying and it doesn't even cost all that much to boot.

The P365 doesn't quite reinvent the wheel, but it sure makes improvements. It's a slim, subcompact striker pistol. Dimensions are not far from that of competing models like the S&W M&P Shield, Glock 43 and so on, as the P365 measures 5.8 inches long by 4.3 inches tall by 1 inch wide, with a 3.1-inch barrel. The party piece is a half-staggered magazine, which brings capacity up to 10+1 in the standard magazine, with available 12+1 and 15+1 extended magazines too.

Subcompact size with greater capacity. Night sights are standard, so you may not need to worry about upgrades, which is a bonus. Some feel it's the perfect carry pistol and if it isn't...it'll do until the perfect one gets here. Sig doesn't advertise MSRP anymore, but you could expect to shell out about $500 for one. It would be hard to argue that wouldn't be money well-spent.

The Sig Sauer P229 is the compact version of the P226, scaled down for a 3.9-inch barrel and a 15+1 capacity in 9mm. The control scheme is the same, with a frame-mounted decocking lever behind the magazine release, and a DA/SA firing system though the DAK (Double Action Kellerman, a light DAO) system is available as well.

Many find the P229 the much more user-friendly pistol, as the trigger reach is shorter and the decocking lever is easier to reach with the shooting hand thumb than the P226. While smaller, the all-metal frame and slide and heft that goes with it (29 to 34 oz unloaded, depending on model) makes the P229 a very soft shooting pistol.

The Sig P365XL adds a little more barrel, a little more magazine and grip, and an optics mount to the P365 to make it a little more shootable. A lot of people insist it's so good for a slim, compact pistol that it all but makes the standard gun pointless. Barrel length is 3.6 inches, and capacity with the flush-fit magazine increases to 12+1 (15+1 with the extended stick) in a gun that's barely any bigger than a S&W Shield. And it comes optics-ready and with night sights as standard.

If you've never had your hands on one, it's shocking how small they've made a gun that only holds three fewer rounds than a compact service pistol. A nearly perfect EDC pistol.

The SP2022 is something of a sleeper in Sig's catalog, in that it's one of their DA/SA pistols much like a P226 but gets overlooked because it isn't the P226. And that's just silly, because it's serious value for money. The SP2022 is essentially a P226 with a polymer frame. It includes an accessory rail, has 15+1 capacity and the classic Sig Sauer control scheme.

The Sig PRO/SP2022 was the service pistol for the Gendarmerie, basically the French FBI. They found a service life into the hundreds of thousands of rounds was not uncommon with these pistols. So while a tad on the large size for a carry gun (about the same size as a P226) it's a workhorse gun that's very attainable. The P320 Compact is the Glock 19-sized variant of the P320, with a 3.9-inch barrel and 15+1 capacity. If the full-size pistol is a bit too large (and it is a tad large) to be a carry gun this is the next step down. A Carry model was formerly offered which was made for the full-size magazines but proved less popular than hoped and has been discontinued.

The base 320 Compact is a solid workhorse gun, just like the full-size, and can be obtained for a fairly reasonable cost of entry.

Everything that's good about the P365, just chambered in .380 ACP rather than 9mm. While that seems silly, it actually makes more sense in a gun the size of the P365.

Since the .380 cartridge is less powerful, it means the gun can use a softer recoil spring, so the gun will be easier to handle administratively. It won't snap as badly under recoil, either. Since it's the same frame and slide, it fits in P365 holsters.

The M18 - the service pistol of the US Marine Corps, US Air Force and US Navy - has some features that could warranty getting one over the standard P320 Compact. The two guns are mostly the same, but what the M18 brings to the table is an optics-ready slide, the SIGLITE sight set (black steel rear sight, front night sight) instead of a three dot set, and the Carry grip module, which uses full-size magazines and only adds 0.2 inches to the overall height with the flush-fit magazine. Yes, there's manual safeties but nobody says you have to use 'em.

Granted, about the only argument against the M18 is that the P320 XCompact is usually a little cheaper and a lot of people like the flat blade trigger shoe more than the standard curved unit. Your mileage may vary on that, but the M18 ticks a lot of boxes for a lot of people.

The Sig 1911 Fastback Carry series are Commander-frame 1911 pistols optimized for carry, and the two takes on the format - namely the Fastback Emperor Scorpion and Fastback Nightmare Carry - are two excellent examples of the breed.

The differences? The Scorpion has an FDE-like PVO finish with black hardware, the Nightmare has a black finish with stainless steel hardware, giving it a wicked partial two-tone appearance. The added steel puts a few extra ounces on the Nightmare, however (38.8 oz vs the Scorpion's 35 oz) and the Nightmare costs $10 more in MSRP. Either way, it's a carry-optimized Sig Commander 1911.

Last but not least is a bit of a departure: the P210 Carry. It's a compact(ish) variant of the P210, the classic service pistol that put the original SIG (before it was SIG-Sauer) on the map. It was displayed at SHOT Show 2019, but didn't reach production until late 2021.

The P210 Carry is akin to a Commander 1911, with a shorter barrel and slide to make it a little lighter, a little more compact but still supremely shootable. Also much like a Commander, it has an alloy frame instead of the steel frame of the full-size model. It's a SAO pistol with a manual safety for cocked and locked carry, has 8+1 capacity with a single-stack magazine and a trigger second only to a custom shop 1911. It's slim, reasonably light (29 oz) and easily the classiest gun Sig Sauer makes.

You will pay for the privilege, but it's a covert version of one of the most exquisite handguns ever made.

← Previous Next →
Related Posts
9 Comment(s)
Dave Kolbenschlag
I bought my first Sig in 1994. It is a P-239 40 S&Wand has always been my daily IWB carry pistol. I bought at the same time an Alessi hand made leather holster. A belt clip on. Both of these items are still in great condition. I can not count how many rounds I have put through the Sig but is is many. Never a failure of the pistol. After the first few days of wearing I never even remember I am wearing it. The holster is totally comfortable and I do not notice the weight of the pistol. My only wish is that Sig had provided a rail with it for mounting a laser. Unfortunately today's Alessi holsters are rated very poorly after Mr. Alessi passed away and others took over the shop. This is still my favorite carry gun among my other Sigs and Beretta and S&W pistols.

Reply
Richard Linares
The Sp2022 offers perfect short size wait for cocnle care handgun. It shoot right where want to.
Reply
Charlie Triplett
I've all ways been a glock person but after shooting m p320 it's like apple's and oranges I j just ordered a special 2022 am excited I still love my glocks but my sig won
Reply
Jose E.
Has anyone tried the p320 subcompact in the compact/carry 4.0 shell?
Reply
James E. Heffernan
I have a sight model 365 and was wondering if the slide from the 365sas can be interchanged with the first model of the 365.?
I have fired the 365 running approximately 700 rounds and at a Target at 75ft---excellent weapon. I was a small arms in structor both in the Corps and Coast Guard. I did serve many years as LEO and find that I wish that I had this weapon in my younger years.
Keep up the excellent work!
Semper Fidelis,
Jim ( Marine vet FM Korea fighting.)

Reply
Jesse Vasquez
I love both of my Sig,'s. I own the p320 Compact and just love it. I use a Remora holster w/extra mag pouch IWB., in the small of my back. Carry it for hours not a problem.
I also have the SP 2022 in 9mm. That one goes on the OWB. A little big and heavy to carry IWB.
This was my 1st Sig. Love the way they shoot.
They both fit my hand like a fine pair of Tony Llama boots.
Reply
Sam
The Sig p938 is probably my favorite carry gun. Only 'issue' is that it is single action but that's really not that big of one.
Reply
Tony Doody
I have several Sigs and my everyday carry is a German made Sig P228. It is is a little heavy, but with a quality belt and My Alien Gear holster it is comfortable and easily concealed. I'm looking at getting a P320,
Reply
Jason Countryman
What about the SIG P224? I love mine for concealed carry, especially with the extended mag in my pocket.
Reply
Load more comments