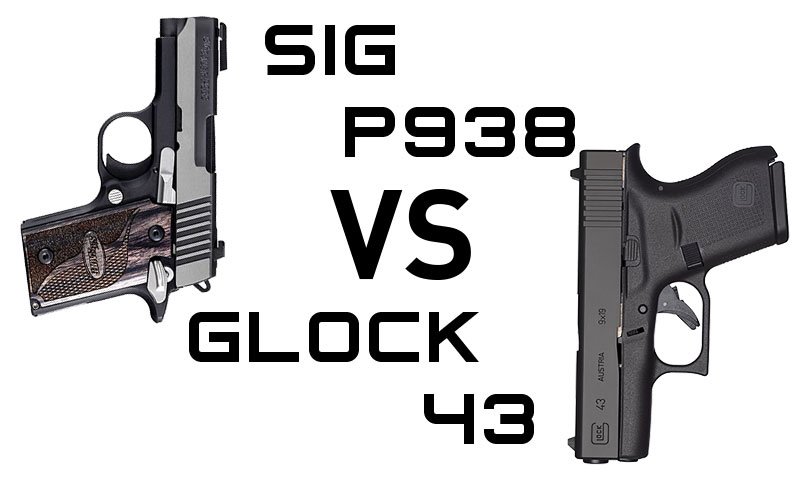 If you're looking at single-stack 9mm subcompacts, you might find yourself deciding between the Sig P938 vs Glock 43 for a concealed carry gun or possibly a backup pistol. Both are incredibly light, incredibly easy to carry and as it turns out, pretty easy to shoot despite the small size.

But which should I choose, you ask?

Well, on paper it comes down to whether you can live with a thumb safety (or not) and what sort of cash you have to burn. In reality, it's also going to come down to which one you like better in terms of the feel and also how it shoots, because you should never buy a gun without shooting it first. After all, if you can't hit the broadside of a barn...why bother having it?

Let's get into the details.

On the side of the Glock 43 in winnowing down between the Glock 43 vs Sig P938, the gun is everything you need and nothing you don't.

Like most Glocks you don't get much in adornment, but you get a hard working gun that you can trust to go off when you hit the bang switch with your booger hook.

The pint-size plastic fantastic is designed for deep concealment and at that it is built to succeed. Overall length is 6.26 inches, with a 3.39-inch barrel. It stands 4.25 inches tall and a slim 1.02 inches wide. Unloaded weight is a lithe 17.95 ounces, so it will be easy to carry.

Carrying capacity is 6+1 rounds of 9mm. It's rated to take any SAAMI regulation ammunition, so that means it can take +P. Search a few internet forums and you might even find some owners have run +P+ through their G43 without issue. Granted...whether you're willing to do that is up to you!

Some shooters find the Glock 43 is a bit too short to get a solid grip on. However, magazine extensions, even extensions that add a round or two of capacity, are available for the 43 from aftermarket suppliers.

Sig P938 Is Awesome If You Don't Mind Single Action

The Sig P938 has a lot to offer for the right person, but that person had better be okay with a single-action pistol.

It's hammer-fired rather than striker and is also a micro 1911. Sig decided to offer their version of a Colt Mustang with the P238 in .380 but scaled it up a bit for 9mm, which was one of those things that seems so obvious that it makes one wonder just what Colt was thinking in not making one themselves.

In any case, you get a pocket-sized pistol in 9mm Parabellum. Barrel length is 3 inches, and it's 5.9 inches long overall. It stands 3.9 inches tall and 1.1 inches wide at the controls. Unloaded it weighs 1 pound. Carrying capacity is 6+1 or 7+1 of 9mm, depending on whether you choose the flush or extended magazine.

However, unlike the full-size 1911 pistols, there's no grip safety; just the thumb safety. That means you have to carry cocked and locked, or lower the hammer over a live round after charging the pistol - totally up to you.

That said, there is a selection of P938 models, starting with the Combat Micro Compact (bare bones, FDE finish) up to the P938 Rose Gold, which has a slide with rose gold accents. Your desires when it comes to finish are entirely up to you and your budget.

Both are small enough for anyone to conceal and carry easily. Both carry the 9mm round, really the gold standard caliber for concealed carry for today, and both pistols are known for shooting better than their micro size would suggest, though getting a grip sleeve is widely recommended by people who live with these guns every day.

First of the things that will set one or the other apart is the grips. Some people, you see, like the 22-degree rake of Glock pistols. Some people don't. If you pick up the Glock and don't think "oh, hey...I like that!" then the P938 would be for you.

Next is going to be the hammer issue regarding the P938. You have to either thumb the hammer while drawing or sweep the safety off, due to carrying cocked and locked. Some people don't mind or even want a manual safety (and wiggling your thumb a bit is hardly a complicated procedure) but you will need to train with it to get the motion down to second nature.

Next is cost. The Glock is less expensive, and will run you about $450 to $500 in most stores in the base guise; a Crimson Trace Laserguard will tack about another $100 on that. The Sig Sauer will likely run you somewhere between $600 and $900, depending on model and where you get it, and not everyone is going to countenance dropping almost $1,000 on a mouse gun.

Granted, you'll want to handle these guns and see which you like more for yourself. The one that feels best usually is. If you can shoot them, even better; the gun that feels best and shoots best is the one to get.

What do you use for your concealed carry? Are either of these an option?
Let us know in the comments below!

Use our free 8.5" x 11" printable shooting target when you go to the range to run these guns yourself! We'll also be adding more targets to our shooting targets collection.

← Previous Next →
5 Comment(s)
DEG
have any number of Glocks - my EDC is a Sig 938 just feels right
Reply
Johnny
Have both, but shoot G43 the most. New stainless guide, extended mags. & even a off market 12 round mag available which I have but not used yet.
Do Luv my G26 over the G43 due to weight & I shot it better too.
Reply
Chip146
P938 is my edc. I own the Glock 26 too but always grab the Sig. Better feel in my hands. The Sig gets lost in my pocket too.
Reply
Cecil Haley
If my lifes on the line, I will go with the Sig everytime!!!
Reply
Lynn Lewis
I do love my 43
Reply