A Quick Guide To Gun Sights For Concealed Carry

So Many Gun Sights to See

Let’s start with some basic information about gun sights. More than likely, that new pistol you just purchased comes right off the showroom floor with a standard set of front and rear fixed sights. The front sight is normally shaped like a post and located very close to the end of the barrel. The rear sight is closest to you and normally rectangular shaped with a “U” shaped notch or a “V” shaped notch in the middle.

These sights, when properly aligned, give you a better chance to hit the target you aim at. If you plan to conceal carry for defensive purposes, you know how important it is to do that. The experts will tell you that target acquisition occurs when the front sight is centered directly in the middle of the rear sight, and the top of both sights are level. Current wisdom tells us that front sight focus has a bigger impact on accuracy.

Fixed sights are just that - fixed. They are stationary and can’t be changed or repositioned.

Adjustable sights can be changed to allow for elevation, windage, or both. Windage refers to how certain variables like wind speed and direction affect a bullet’s trajectory to the right or left.

Some guns come with trench sights, which are literally a groove machined into the top of the frame and that is it.

Fixed sights work very well for the person who wishes to concealed carry for self-defense when quick target acquisition is needed. Adjustable sights are costly and better suited to target and precision competitive shooting. These sights can be a bit more fragile than fixed sights, and since they come with a higher profile, they can make for a clumsy draw with a lower quality holster.

However, the serious competition shooter or handgun hunter will definitely want to have precision adjustable sights.

Quite a few handguns come standard with 2-dot, white colored sights. Normally, the front sight is round in shape, and the rear sight has either a dot or a white vertical line centered in the middle of it. Other models like my Glock 36 have a “U” shaped rear sight with a white “U” outlining the opening of the sight.

Many newer handgun models come with a white 3-dot configuration. Two dots are painted on the rear sight and one dot is painted on the front sight. The goal is to align all three dots in an equally spaced and level row for center-target hits.

Some find the 2-dot sights are easier to align, especially for those shooters who use the flash sight picture shooting technique.

Some shooters find the 3-dot sight provides too much optical input, causing the shooter to inadvertently focus on the rear sights, though some may find they prefer one or the other.

Iron sights are pretty much what they sound like. They're the typical steel sights that come stock on most handguns.

In the old days, they were all you had to work with. Black if your gun was blued, nickel if you had a nickel finish and that was it. A few folks had the idea to add a gold bead or paint to the front sight - an old hunting trick; brass or gold beads had been on high-end hunting rifles for a long time - or swap the rear post for an adjustable target sight, but iron sights were pretty much all there was for the longest time.

Eventually, the gun industry came up with the idea of white dot sights, adding dots of white paint to front and rear sights on factory pistols. Some others use a U-shape on the rear sight.

While better in a sense than old iron sights, a lot of shooters have small love for white dot sights and in fairness, they aren't really the absolute best thing for a pistol that you have for concealed carry or otherwise for self-defense. It's not that you can't, but it's that there are better tools for the task.

Night and low-light sights are standard equipment for most law enforcement and military applications, but are also very well-suited to self-defense and concealed carry applications. Threats and dynamic emergent situations don’t disappear when the sun goes down, or in shadowy, dimly lit conditions. In fact, they actually increase; studies show that most police shootings and civilian defensive shootings occur in low-light environments.

As a result, laser sights and tritium night sights are a good investment for a concealed carry pistol.

Laser sights emits a narrow beam of red or green colored light onto the intended target. They aren’t suited for use during daylight, when the beam or dot isn’t visible. Nor are they good for long range; maximum visible range is about 20 to 30 feet.

The drawbacks are the beam itself could give away the shooter’s location. Laser sights are also battery powered, so regular battery replacement is a must.

Some lasers are attached to the pistol using a guide rod system. The laser guide rod replaces the manufactures guide rod. On the downside, if the laser housing should become damaged, the pistol will no longer function.

Another way to use a laser sight is to replace the factory grips on the pistol with a laser grip, such as those made by Crimson Trace. The laser’s activation switch is positioned so that it is turned on when the pistol is held comfortably in the shooting hand. Care must be taken not to obscure the laser’s beam with either the shooting or supporting hand.

Some laser sight designs attach to the front of the trigger guard. Other lasers are designed to be used by attaching to an accessory rail, such as those on pistols equipped with a 1913 or Picatinny rail.

Tritium night sights are very effective in low-light conditions. These sights use a very safe, low-dose radioactive gas to produce illumination instead of battery power. To activate them, a “primer” source of light must be aimed at the sights, since tritium is photoactive. However, the effect wears off after a certain period of time so you have to occasionally reactivate them. This especially goes for guns that sit in a dark place (like a gun safe) for long periods.

Once activated, the sights provide three brightly lit green tritium dots, two on the rear and one on the front sight that contrast with a darker background making for easy target alignment. They also come in yellow and orange colors too, though green is more common. Tritium sights have a half-life of about 12.5 years, so the illuminative effect will dissipate as the tritium decays.

When deciding on the type of sight you want, determine if you plan to use your firearm for concealed carry purposes or competitive or recreational shooting. Fixed sights are often adequate for concealed carry/self-defense, but having night sights helps a great deal should you have to shoot in low-light conditions. If that is a concern, you may wish to give more thought to upgrading to night sights or laser sights. 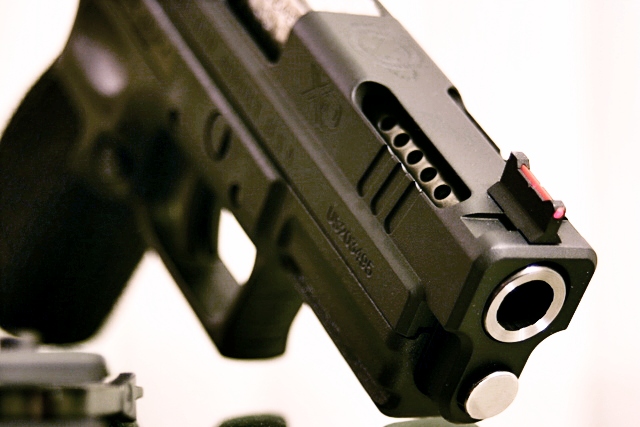 Fiber optic sights are another popular sight type, and there's some argument over whether you should opt for them over night sights.

Some people opine that fiber optic sights are best for target pistols. They're also very popular for hunting, as a fiber optic is a fantastic sight for a shotgun, iron-sight rifle or handgun.

The way they work is that the inner material is reflective, meaning it picks up light. The outer cladding is non-refractive (or at least not very refractive) meaning that it doesn't bend or let much light escape.

Put in the simplest possible terms (meaning this is scientifically not very accurate!) fiber optics capture light, and hold it inside the fiber optic tube as much as it can.

What this means in practical terms is that it captures ambient light and makes the sight more visible. Daylight lights them up, so you can see them very clearly. Hunters appreciate them because they stay very well illuminated on a cloudy day.

This is why fiber optics are very popular with target shooters and why they're offered by most third party sight makers. And they work pretty well! Does this mean they're great for a carry gun?

The fiber optic vs night sight debate goes like this: fiber optics depend on ambient light, whereas night sights are phospholuminescent. Therefore, the latter are more visible at night and are therefore better for a defensive pistol as not all defensive encounters occur in daylight.

Which, on paper, is true, so far as it goes.

However, a few things should be stated. First, fiber optics can pick up ambient light in low-light conditions. They'll still illuminate, but just not as well with abundant ambient light (such as in daytime) but will still light up a bit. So they aren't useless at night, by any means.

Second, most defensive shootings involving civilians (keyword there!) occur in areas that do have a good amount of ambient light. The typical street or parking lot usually has a street light (businesses actually have to have them by law) and the typical home is only completely dark during a power outage. The average domesticated home in the suburbs usually has a good amount of ambient light at night time.

Granted, this is your choice. It's your gun, and you need to make the best decision for you. There's a reason why night sights exist, after all, so it's not like there's no point to having them. It's just more the case that fiber optics aren't ONLY for target guns; they can go on a practical weapon and still be functional, although not to the same degree as actual night sights.

What To Look For In Handgun Sights

What you really want to look for in handgun sights is the following:

You can see them really well.

That is the first-, second-, and third-most important concern. There are a few factors that determine whether a gun is a good fighting pistol, and sights you can see are arguably the most important. (Along with a trigger you can use and controls you can operate.) You should ideally look at the sights before making a purchase.

Try acquiring a sight picture a few times. Do you easily find the sights when the gun gets on target? Or do you have to really focus to find them? If the latter, then you'll need to either replace them or find a different gun.

Fiber optic vs night sights...this is a decision you have to make for yourself. It is true, again, that night sights are better in low-light environments, but fiber optics aren't completely useless for one and for two, are known to aid in fast, accurate shooting. That's why a lot of aftermarket sight makers - Trijicon, TruGlo, etc. - have sight designs that actually have both!

As to the precise handgun sight design or type...that's really down to personal preference. So long as you find the sights easily usable, you're good.

From there, it's all down to what kind of sights you WANT to put on your handgun.

← Previous Next →
1 Comment(s)
Mat
I would like to offer a correction. Tritium night sights do not need a source of light to activated them. The beta decay from the tritium serves that purpose. The ones that need charged are Photoluminescent Night Sights.
Reply