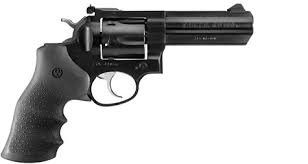 In this Ruger GP100 review, we'll go over Ruger's entry-level maggie. The GP100 is often thought of as one of the best workhorse guns available, and certainly one of the best .357 Magnum pistols on the market today. Is it though?

The gun is a hoss, no doubt about it, and investing in one will pay dividends in terms of what you get for what you pay. It may lack some of the touches of finery that you get from other revolver makers, but the GP100 makes up for it in how it shoots and just how darn tough they are.

So, is the GP100 the wheelgun to stick on your belt? Generally, you couldn't do much better but it does depend on what purpose you have in mind for it. 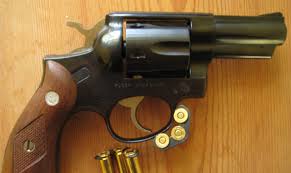 The Ruger GP100 first debuted in 1985 as a replacement for the Security Six family of revolvers, which included the parent model as well as the Service Six (a budget-friendlier fixed-sight model) and Speed Six, a round-butt short-barrel for use as a concealed carry revolver or plainclothes duty gun.

The Security Six line was well-received, especially by law enforcement, but wasn't without issues as they were showing wear in service roles and with civilian shooters if fed a diet of full-house magnum loads. Ruger didn't believe that you should HAVE to practice with .38 Special if you don't want to and set about creating a new medium-frame double-action revolver that would digest a lifetime of magnum loads.

To turn the trick, the frame and cylinder locking mechanism were beefed up in key areas. The grip frame was changed to a peg shape, so the grip fully enclosed the frame and the grip frame was thickened. The trigger and lockwork mechanism was changed to fit in a trigger group that could be dropped out of the frame entirely, making it not only easier to work on but also allowing for the frame to be a single piece of thickened steel.

The frame alloy was also revised for additional strength.

As mentioned, the goal when Ruger created the GP100 was to make a .357 Magnum revolver for shooting full-house loads, and build it for the purpose from the ground up. We received a stock model, and at that, our Ruger GP100 review pistol was the base model that most people will find in stores. It has a black stainless steel alloy frame that's blued and black rubber overmold grips by Hogue, the standard of most Ruger double-action revolvers.

Sights are an adjustable rear sight and a black front blade. Other models have upgraded sights, including fiber optic or red insert front sights, and the front sight can be swapped out if so desired.

Standard barrel length is 4.2 inches. The gun stands 9.5 inches long by 6.5 inches tall by 1.5 inches wide, so it's not petite by any stretch of the imagination. It's also - as mentioned - a real hoss, weighing in at 40 ounces unloaded.

Is it worth it?

Ruger GP100 Is A Great Gun...For Most Applications Overall, very worth it! However, the Ruger GP100 is not a great concealed carry gun. Short-barrel models are made, but the SP101 is the better choice there because the SP101 is made for that application. The GP100 is more of a home defense gun or packin' gun for the backcountry in non-grizzly territory.

The GP100 is known to lack a bit of refinement. There are some more expensive revolvers out there with more attention to aesthetic details, with cleaner lines and fancy wood grips. The base GP100 is a workhorse. Function first, form later.

In single-action mode, the trigger is a joy; in DA mode, it's...well, it works well enough. Single-action operation gives you a crisp, clean 4 pounds with minimal travel and a break like a glass rod. The double-action trigger pull is about 10 pounds. There's no overtravel, no serious grit, but it starts to stack very obviously about halfway through travel.

A bit of stacking is going to happen with DA triggers. This can give some shooters fits, but you overcome it by manhandling the go pedal. Squeeze it hard, smooth and straight and it's no big deal; dawdle with the squeeze and the stack will give you problems. Granted, the GP100 trigger is not the worst in this regard; there are more expensive guns with worse DA triggers.

That said, revolver triggers smooth out with use and you could always get the trigger tuned for a smoother pull.

As for me, personally, the guy writing this, the only thing that I found objectionable on GP100 revolvers is actually the grip. The trigger I can live with, but the grip felt a little small for my liking. They soak up recoil just fine; that's not the problem. It's more that the stock grip is a bit narrow from front to back and side to side for me. (I wear size 10/XL gloves, so I have bigish hands.) If you're shooting anything powerful, you want the grip to fill the hand up a bit you can get a high, tight grip on the pistol. The GP100's stock grip was a bit small for my hands.

I wouldn't hesitate to buy one, and I'd recommend this gun to anyone looking for a full-meal-deal .357 Magnum. Were I to get one, a set of thicker Hogue or Herrett stocks would be installed as soon as I could get them in.

It's a rugged gun, built strong to digest a lifetime supply of the hot pills. It'll take whatever you feed it and keep on coming. You miss out on refinery, but that won't mean you can't enjoy it for what it is.

And just what is it? It's a hoss of a gun that makes shooting full-house magnum loads a piece of cake. Shooting .38 Special out of this gun feels like you've been coughed on by a baby mouse. Shooting full-house .357 Magnum loads that otherwise make you think twice is not really too much of a problem; recoil is comparable to a lightweight compact 9mm. There's some kick (you'll notice the noise!) but it's very manageable.

The GP100 is plenty accurate, definitely more than enough for government work. In expert hands, I'd wager it'll shoot the same groups as revolvers with 1.5 times the price tag or so close that it makes no difference.

The GP100 is a tank, but it's made to be one. If you meant to carry one, you'll need a strong belt and concealment would probably not be the easiest thing...though if you had the right holster, it wouldn't be impossible. Most people, though, use it as a nightstand gun or woods pistol, and in those roles it excels. If you were to have only one revolver in your collection, this would be the one to get.

← Previous Next →
1 Comment(s)
Tim
My understanding from the catalog and my own Gp100’s is that the blued models are of carbon steel and only the shiny stainless models are stainless. I don’t know of any stainless, blued revolvers by Ruger. S&W has produced blued, stainless revolvers, I think. Am I wrong?
Reply