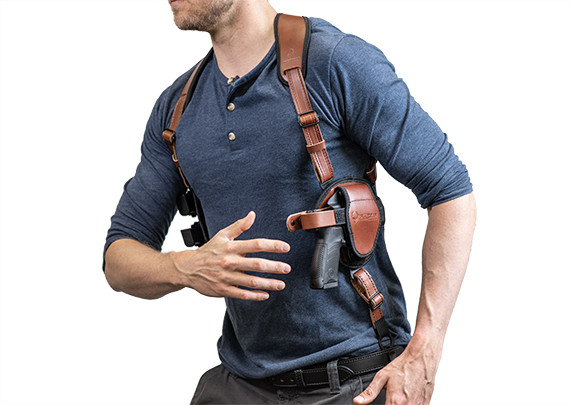 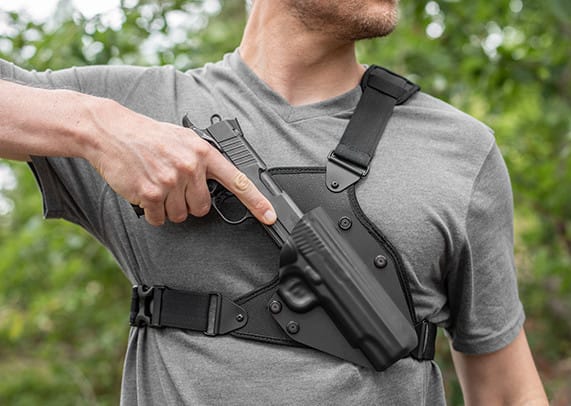 Should I Get A Shoulder Holster Or A Chest Holster?

If you want to carry off the waistband, two popular options are a shoulder holster or a chest holster. Depending on why you want on and therefore what you intend to do with it, you may be better off with one than the other.

Of course, there's nothing wrong with having both!

But if you found yourself in the position of having to choose one or the other, let's go over what might make one a bit better for you than the other.

A Shoulder Holster Can Be A Little More Versatile...In Some Cases 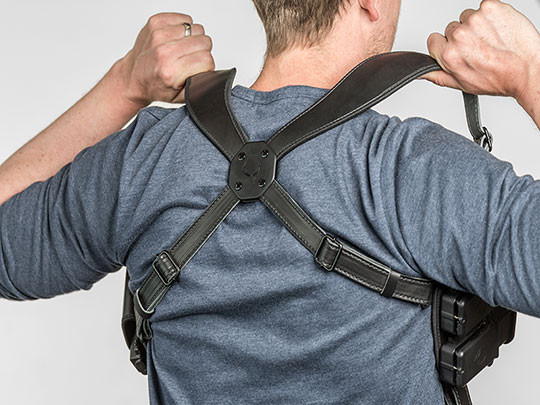 On paper, that is.

As a concealed carry holster, a shoulder holster can definitely work, and plenty of people use one on a daily or near-daily basis with success. However, it isn't necessarily simple. A belt holster, like a high-ride OWB or IWB is always going to be easy to conceal, but a shoulder holster is a little harder.

While adjustability in a shoulder holster can make a huge difference, either the holster itself lays on the body in a way that's easily concealed or it doesn't, so it's kind of the case that either it works in that role for you or it doesn't and isn't going to.

But let's say it doesn't. What else is a shoulder holster good for?

The right shoulder holster, which is correctly designed and made with the right materials for it, is very comfortable to carry with. You also free up the waistband, in case you're wearing a waistpack or otherwise just don't prefer to have your waistband occupied with a holster and gun.

GET YOUR SHOULDER HOLSTER HERE!

A Chest Holster Is The Default Choice When Carrying A Pack 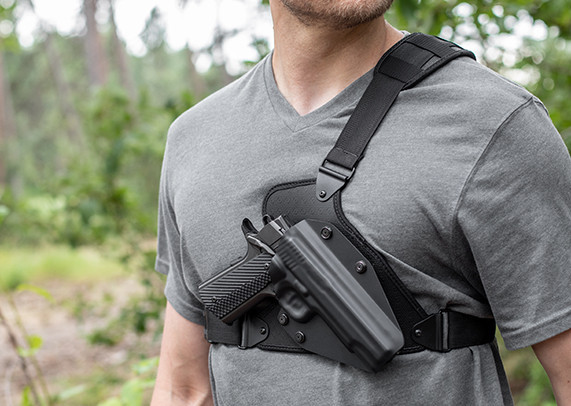 A chest holster is more or less an open-carry only proposition and - at that - is perhaps the default choice for backcountry hikers and hunters who are carrying a large backpack for extended periods.

Larger backpacks have both shoulder straps and waist belts. As a result, a waistband holster - either IWB or OWB - is not feasible, nor is pocket carry but neither is a shoulder holster since the shoulder straps of the pack are going to interfere.

That was the idea behind the old tanker holsters worn by tank crews and some paratroopers in WWII; a tanker holster actually keeps a sidearm more on the front of the abdomen rather than on the side, so you can still carry your pack or sit down unimpeded.

At that point, you're basically limited to either a drop leg holster or a chest holster, which gives you the ability to carry the gun but also doesn't impede access in the event of emergency or if you're using the holster for handgun hunting.

There are some other applications for one, but if you wanted to get all "something something tactical" about it...the truth is that the military and police are usually wearing gear with PALS webbing, so a chest holster they use is actually going to be a MOLLE holster rather than the typical chest holster, which has straps.

Granted, hikers and backcountry hunters aren't the only people who can use one. We've had some reports from a few customers who use a wheelchair that they use a chest holster to carry with. Just about anyone who open carries can use a chest holster, though the aforementioned folks spending time in the outdoors tend to be the folks who buy them.

Concealment is...well, you could probably find a way to make it work but the truth is not too many people are even going to try and it doesn't work nearly as well as other holster styles. So it's basically a non-starter. They work for general open carry purposes, but a regular OWB or drop leg holster is going to be a bit more comfortable and a little faster on the draw, which is why people who open carry regularly, whether as an armed civilian or for work, tend to prefer those methods. Of course, you'd be looking at a shoulder holster or chest holster for an off-body carry method as that's what they're made for.

A shoulder holster is really more of a general carry method, more for everyday use, and a chest holster is a bit better suited to rather specific circumstances. Generally, that's how most people approach them and in our experience, that's also what tends to be what drives our customers' purchase decisions when they buy a chest holster, shoulder holster or - since we mentioned it - a drop leg holster from us.

If you were wondering what would make one or the other a better purchase for you, it's really about what you intend to do with it.

If you're looking for an off-body carry method that you're going to use when concealment is just not a concern, and most likely tooling around in the outdoors, a chest holster is a great pick. If you want to carry off-body on a more regular basis, a shoulder holster is the better fit.