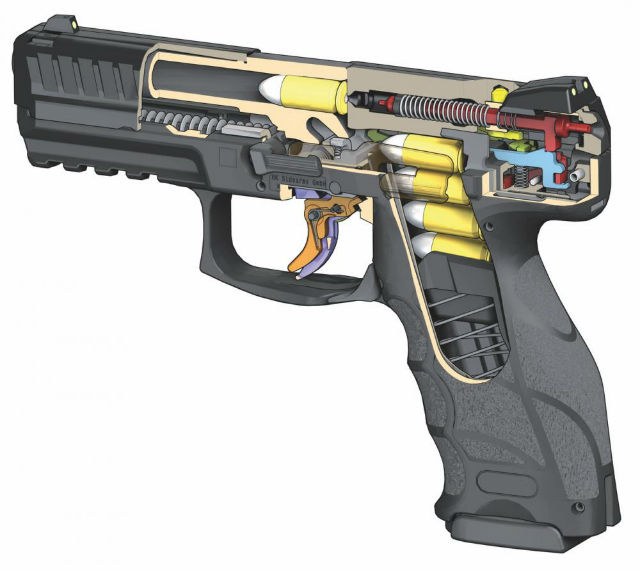 One of the safety features built into most firearms and certainly touted by manufacturers is "drop safety." In other words, that the pistol can be dropped while loaded and will not discharge...except there clearly are limits to it.

After all, there are recorded instances all the time where a person drops a loaded pistol and it goes off, sometimes even injuring people.

Just how drop safe ARE pistols, anyway? Let's actually talk about this. You see, it's not actually as simple as you'd think… 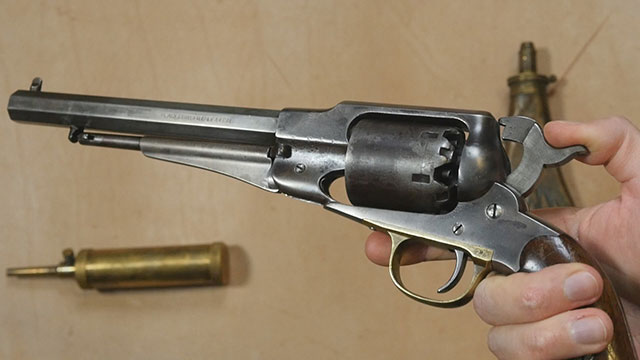 So, most modern pistols have some sort of mechanism for drop safety. In fact, the first of them were installed way back at the end of the 19th century.

Eventually, this feature would be common on ALL revolvers, though today's replicas of old single-action revolvers (like those made by Pietta, Uberti and so on) may lack them. (Though some models actually have a safety mechanism, like Uberti's floating firing pin.) Funnily enough, Colt doesn't install them in their modern Single Action Army pistols, which is hilariously awful since they were installing hammer block safeties in the Police Positive before the FIRST WORLD WAR.

It's a simple device. Basically, it's a cylinder with a chunk taken out of the middle.

The way a firing pin block works is that it's linked to the trigger via a lifting arm. At rest, the cylinder blocks the firing pin so it can't move forward and hit the primer of a cartridge. As the trigger is pulled, the lifting arm pushes the block up and the cutout moves up into position to allow movement of the firing pin and thus allowing a round to be discharged.

However, like any mechanical device, there IS the chance for failure, which is why drop-fires do happen. 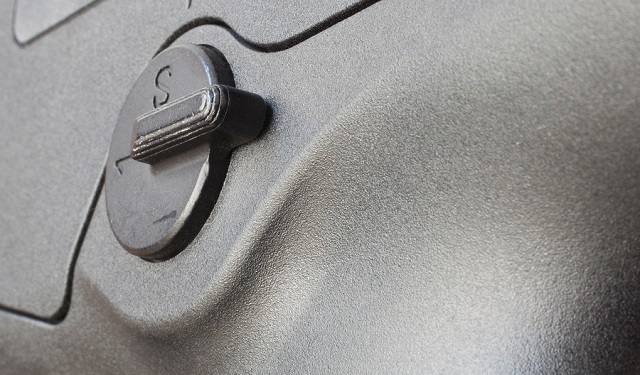 While drop safeties are common on pretty much all pistols these days, they have limitations.

For instance, Sig Sauer's P320 pistols were billed as being perfectly drop-safe until someone discovered a way in which the pistol could be drop-fired, specifically by dropping it at a specific angle.

Other guns have likewise been found to be susceptible to drop fire despite the manufacturer claiming that they were drop-safe, even tested to be drop-safe.

What does this mean, exactly?

Here's where this issue starts to get a bit more complex than it seems at first glance.

Generally speaking, pistols that have a drop safety feature ARE drop safe in that the firing pin block does it's job of blocking the firing pin. It's just that there are certain instances and circumstances - meaning a specific way in which the pistol is dropped - that may still result in a drop fire occurring, as the gun is struck hard enough to send the firing pin forward anyway.

Furthermore, those conditions are not necessarily easy for manufacturers to anticipate. In fact, there may be no way to anticipate them. Also, and this part gets lost in the conversation about drop firing:

You aren't supposed to drop the gun in the first place.

Buckle up. We're about to dive even deeper.

Believe it or not, but gun makers DO have their pistols tested for gun safety prior to production. Once they've created the final design, the pistol is submitted to various organizations for testing.

The dominant organization is SAAMI, or the Sporting Arms and Ammunition Manufacturer's Institute. SAAMI performs a series of drop tests to ensure that a pistol does not discharge if dropped. If the gun passes, they report to the manufacturer and anyone else concerned that it did.

You can actually read SAAMI drop safety specifications yourself. It's publicly available, and we got it straight from their website.

Some states, such as Massachusetts and California, require that gun makers submit their pistols to testing agencies for certification as being drop safe. CA and MA each have their own requirements and approved laboratories that perform the testing, so gun makers have to submit their guns to those agencies as well to sell in those states.

It should be mentioned that the SAAMI tests are not required by law; gun makers voluntarily have their products tested for safety...and they have to pay for it, too!

In other words, gun companies have their products tested - and on their own dime, no less - prior to putting them into production.

Since the drop testing organizations are pretty thorough, you can't say that guns are not being testing for drop safety; manufacturers are doing their due diligence.

Why is it that guns keep getting found to go off if dropped, though?

Limits Of Safety Testing And The Nature Of Firearm Design 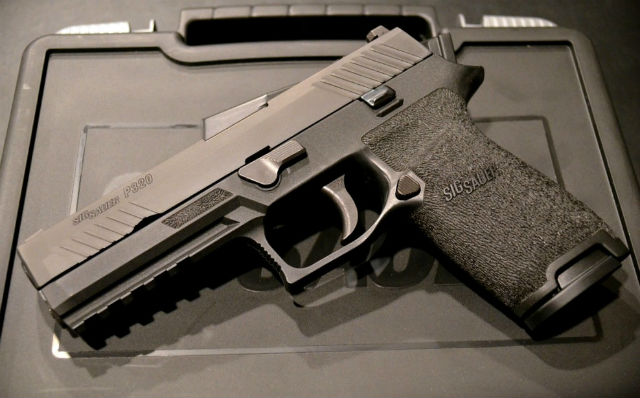 The thing is that safety testing has limits. For testing agencies or gun companies to anticipate every single variable that might influence drop safety is more or less impossible.

To build on a little bit.

So, the Sig P320 affair was that someone figured out that the gun would discharge if dropped on the back of the slide at a specific angle. While this might seem like a "how could they have not thought about that?!" thing, it isn't actually that simple.

In other words, it would take years to not only come up with all the different testing parameters, let alone do them.

Then we come to the nature of gun design.

This is not to say that any particular design of gun is inherently dangerous. This is instead to say that every type of firing mechanism has it's own features, benefits, drawbacks and so on.

First, let's talk about how a firing pin works.

How a firing pin typically works is there's a spring at the front of the firing pin, like a shock absorber. The pin is knocked forward by the firing mechanism until it strikes the primer. At that point, the spring compresses and sends the firing pin rearward until the spring fully decompresses.

Now, this isn't to say that hammer-fired guns are safer. They aren't, and for this reason:

If ANY loaded gun is struck from behind with sufficient force, the firing pin CAN be knocked forward, even with a firing pin block in place. Hammer OR striker-fired.

So while some people might be apt to say "that makes the 1911 the safest gun on the planet!" and especially those of us who like that platform, it just isn't true.

What this IS to say is that when a drop fire occurs, it is not at all like when Ford decided that they'd ignore the problems with the Pinto because it would have been more expensive to fix the Pinto than pay a few out-of-court settlements in case people were BURNED ALIVE in their cars. And yes, in case you're curious, that's exactly where Chuck Palahniuk got the idea for that bit in "Fight Club."

Point being: the gun industry makes a good-faith effort to ensure their products are safe. It's just that sometimes, someone finds a condition that wasn't necessarily anticipated or even anticipatable.

If It Bleeds, It Leads

Now we come to another aspect of "drop safety," which is the principle that "if it bleeds, it leads." What's meant by that is sensationalism sells.

Think about it. Television news and newspapers use negative spin and ignore broader contexts to sell copies, paywall subscriptions and increase viewership. It's how they get paid.

And yes, that includes their coverage of guns and gun owners.

Professional wrestling has a concept called "heat," where a performer gets emotional traction through what they say or do. The guys who get the best "heat" are the "heels," or bad guys. Jake "The Snake" Roberts, siccing a cobra (devenomized, of course) on Randy Savage. Dwayne "The Rock" Johnson being an arrogant cad. "Stone Cold" Steve Austin drinking beer and punching his boss.

The king of all heat was, of course, the Iron Sheik. (RESPECT THE LEGEND.) An Iranian bad guy at the same time as the hostage crisis? That's white-hot heat...and the hero who finally "put him in his place?" Hulk Hogan. Which is what launched his career. I think you probably get where this is going: heat sells.

Is this to say that guns couldn't be made better or more safe? No, obviously not. This IS to say that something like a drop-fire, without the full context of relevant facts behind it, can easily be used to sell magazines, get likes, shares and so on, by manipulating people's fears. If you don't have a fuller picture, it's easy to get caught up in it.

This is also not to say that everyone who has ever reported on a drop-fire has done so merely for the purpose of ratings, views, financial gain or what have you. Of course that's not the case. However, it is to say that if one does happen, it can be a big story and people do capitalize on that.

Not to whatever, but part of good gun safety is to not drop a loaded pistol in the first place.

Look, people drop things as humans can occasionally be given to clumsiness (my shins have taken on my coffee table more than once, only to lose every time) but it is just not very hard to keep from dropping a gun.

Unless you're shooting, there are only two places to put a loaded firearm: in a safe, or in a holster. Otherwise, unload it.

But what about being concerned with a drop while carrying?

If your pistol is close to or is coming out of the holster, you either need an active retention holster, you need to dial yours in better or just get a better holster, period.

That's why Alien Gear Holsters have adjustable passive retention - so you can dial it in good and secure!

Is this to say that accidents don't happen, and the gun industry shouldn't try to make guns drop safe? No, of course not. (DUH.) It's more to say that if you use the right gear, and you don't act the fool, then drop safety probably won't be an issue you ever have to worry about.

In the field, so to speak, guns are dropped generally if someone has done something wrong. They bought the wrong gear, or they were doing something they shouldn't be doing.

In fact, Alien Gear Holsters was started when our founder was carrying at - of all places - a Chuck E. Cheese. The story goes that he went to the bathroom and his gun fell out of the holster. It spurred him into making a better one, and now we're one of the largest holster makers on the market.

So to sum up, the thing about "drop safety" features is that gun makers take pains to make their guns drop-safe. Not only do they do so in the engineering/design phase, they also have them tested to make sure that they are.

← Previous Next →
1 Comment(s)
DW
Thanks for the informative article! As always is the case, the most important firearm safety is the person carrying it!
Reply Aug 25, 2019 13:20