Not everyone wants to shoot dreary old .45, but what some of the purists won't admit to is that a 1911 9mm actually makes more sense than .45 ACP.

You get more rounds onboard (8+1 to 10+1, depending on frame size and magazine) and incredibly soft recoil. It's actually authentic, in a way, as the initial versions of the gun were made in .38 caliber rather than .45. That makes an already natural-pointing, easy-shooting pistol even easier to operate. That's a slam dunk in anyone's book. 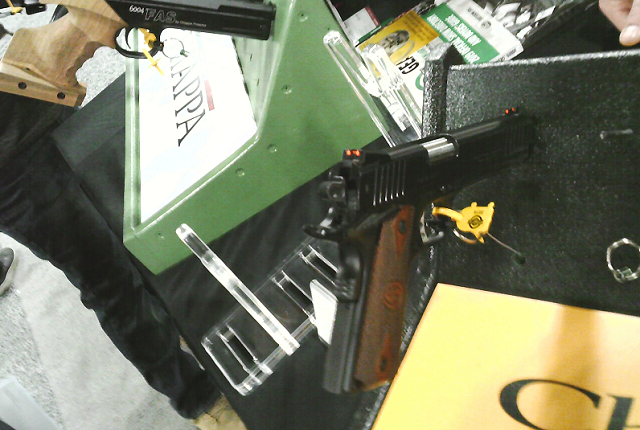 The Charles Daly Superior Grade is a budget 1911...with all the bells and whistles. If you want a lot of features, but don't want to pay too much…this is the best I've found to date. Only Rock Island Armory pistols come close, but - in this author's humble experience - the Charles Daly is a little nicer.

It's a Government frame, with a 5-inch barrel. The slide has fore and aft serrations, with a skeleton hammer and three-hole trigger. A beavertail grip safety is added for a high, tight grip, along with ambidextrous tactical safety levers. Sights are a rear combat ramp (black steel) with a fiber optic front sight. Both are dovetailed (appears to be a Novak sight cut, but don't quote me because I can't find confirmation) so you could upgrade them if desired.

The finish comes in any color, so long as you like black, and the grip panels are walnut as they ought to be. The firing system appears to be Series 80, but the trigger is still very good; crisp, clean, just as a 1911 should be.

A Colt or Springfield with this features list will run you around $1,000. While the Charles Daly has an MSRP of $917, you won't have any issues finding one for under $700. While not uber-cheap, that's a lot of gun for the money.

Lightweight Commander Is The Original Colt 1911 9mm For Daily Carry

If you want a Colt 1911 9mm that's easy to conceal and carry, why not get the original? That would be the Colt Lightweight Commander.

Back in the 50's, the US Army wanted a lighter pistol for officers besides the Government 1911, and they wanted it in 9mm. Colt invented the Commander, a chopped-down 1911 pistol. Though it was originally chambered in 9mm, they also produced it in .45 ACP and in .38 Super. It's been a popular gun since it was released, and a lot of people carry a Commander frame to this day.

The barrel was cut down to 4.25 inches, the dust cover was shortened and that was about it to create the first edition. Within a year or two, a model with an aluminum alloy frame was introduced for easier packing. The steel frame version is only an ounce or two lighter than the government model; the Lightweight Commander is lighter by more than half a pound.

Today's Lightweight Commander Colt 9mm 1911 weighs in at about 29 ounces, and carries 9+1 of 9mm though aftermarket 10-round magazines are available. Colt has also added Novak sights, an upswept beavertail grip safety and bobbed hammer as well as a dual recoil spring system. While getting the original will cost you (MSRP is $1,000 but you'll find it for more like $850) it's actually one of the more affordable lightweight Commander frames out there. And it's made by Colt.

Is it the best 1911 9mm? That's pretty subjective. However, it is the original 1911 9mm for daily carry, and is a proven performer in that role. 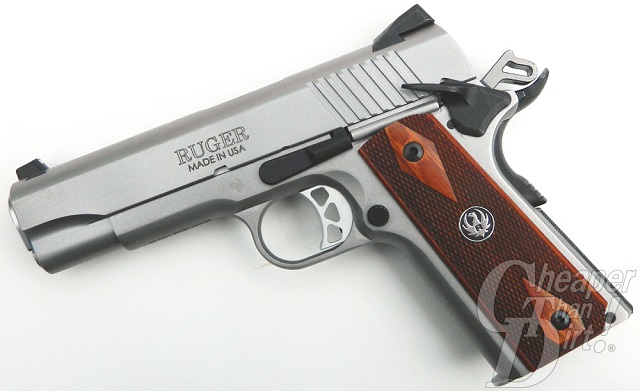 The SR1911 tends to fly under the radar, which makes the Ruger 1911 9mm Commander model something of a cult favorite. They offer two 9mm models, both of which are lightweight commander models.

Both feature upswept beavertail grip safeties and skeleton hammers, along with a Series 70 firing system and crisp, tuned trigger. Both are two-tone, with a black-gray aluminum alloy frame and stainless steel slide. The standard model is a brushed matte finish, but Ruger also offers a TALO exclusive model with a gloss finish. Both models also feature Novak three-dot sights.

Much like the Colt, both are suited to range work as well as carrying as unloaded weight is 29.3 ounces, so they would go well in an 4.25-inch 1911 IWB holster. MSRP is $979 for the base model...but because it says "Ruger" on the side, in-store prices will be lower than those that say "Colt," and with all the same upgraded bits.

The Range Officer Compact Springfield 1911 9mm pistol is technically a CCO, or Concealed Carry Officer model. CCO pistols have a Commander slide and barrel (Springfield installs a 4-inch barrel) on a shortened Officer frame, standing 5 inches tall. It can be had in .45 ACP, but is a gem in 9mm. In terms of features for price, it's one of the best bangs per buck of Springfield handguns.

Features on this compact 1911 9mm include a Novak-style ramp sight on the rear, fiber optic on the front, a competition-style trigger, upswept beavertail grip safety and a parkerized black finish with cocobolo wood grips. Controls are left-side only, keeping it from the bloat of ambi safety levers.

MSRP is $924, and since you'll pay less in-store, that arguably makes this among the best 1911 9mm pistols for the money.

There are a number of Officer frames out there, but the Kimber 1911 Ultra series are some of the best. The Ultra series is Kimber's nomenclature for Officer frames, which - depending on whom you buy it from - has a 3-inch to 3.625-inch barrel and a shorter grip, usually 5 inches in overall height. Kimber installs a 3-inch match barrel in all Ultras.

The options from there are up to you. Left-side only or ambidextrous safeties, a bevy of color options up to Kimber's gorgeous amethyst and even rose gold finishes. Or you can opt for stainless or two tone; whatever strikes your fancy.

An Officer frame in 9mm makes more sense than .45 ACP, as it will be much easier to shoot as well as easy to conceal and carry.

Dan Wesson 1911 pistols are the bridge between the full-on custom guns and factory pistols, balancing finery with value and making the Guardian arguably the best 9mm 1911 pistol you can buy short of having Ed Brown, Les Baer or Wilson Combat make you one. Dan Wesson was in the business of high-end revolvers for a long time, but was starting to get into high-quality 1911 pistols when they were acquired by CZ-USA.

Prepare to shell out, as MSRP is $1,588. You'll probably find it in stores for less (closer to $1,300 in most cases) but you're getting your money's worth in terms of quality. Dan Wesson guns are semi-custom, in that some aspects of construction that would be done by hand in a custom shop are done by machining, but the important details are seen to by a craftsman's hand.

What does that entail?

The slide is hand-fit to the frame, for glass-like smoothness. A match barrel and bushing are likewise hand-fit, for tight, precise lock-up. This means the pistol cycles like nothing else and will group tighter than you are likely capable of. These aspects are the details that are not addressed on many factory guns, but a Dan Wesson pistol does get attention to those details. The MIM parts some people grouse about? None to be found, either.

The Guardian has an aluminum alloy frame, reducing carry weight to about 28 ounces, and the mainspring housing is bobbed for easy concealment. This is intended for use as a carry gun, no doubt about it. The grips are a wood/stipled polymer shadow set, which go very well with the black Duty finish of the gun. The front and rear of the grip is given 25 lpi checkering for a good grip. A beavertail grip safety and bobbed hammer are added at the rear, and the slide wears a Novak combat ramp at the rear and tritium night sight at the front. The heart of the gun is a 3.5 lb - 5 lb trigger with a Series 70 operating system, for a clean, crisp break.

This is a do-it-all handgun. It will punch paper at the range all day, in competition or for pleasure. It is also designed with concealed carry in mind, and with the lighter weight alloy frame you should be able to pack it all day without issue. This could be the last gun you ever need.

Price of entry is steep, to be sure...but you're getting one of the best pistols money can buy, full-stop.