If you've been thinking about getting one, then hopefully you find this Beretta PX4 Storm review helpful. If not...we don't care!

Just kidding! We hope you do.

The Beretta PX4 Storm is a very decent pistol to pick up, as it offers the tried-and-true Beretta DA/SA operating system in a pistol that actually belongs in this century. We think it's one of the best Beretta 9mm pistols they make, and hopefully they keep making it for some time.

Basically, if you like the Beretta 92, but wish it had some more modern appointments, you'll love it. If you were wondering if there was a gun that could possibly entice you to the Double Action Dark Side, this would be high in the running. 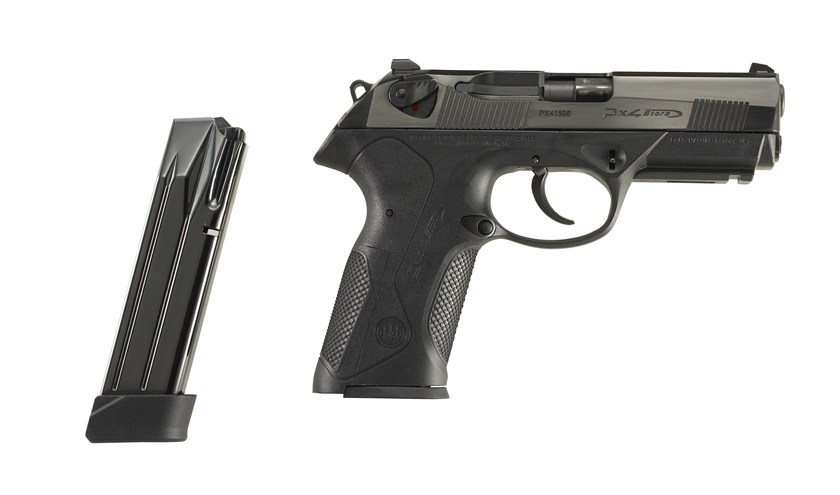 For now, we'll discuss the Beretta PX4 Storm specifications for the full-size model. There are also Compact and Subcompact variants, but for the moment we'll talk about the full-size.

All models have certain common features, including swappable grip/backstrap panels, ambidextrous slide-mounted control levers, fore and aft cocking serrations and a Picatinny rail for mounting accessories. The magazine release can be swapped to the right side, and the takedown tabs (a la Glock) are also ambidextrous. There is, however, no right-side slide stop/release lever, so lefties are out of luck in that regard.

The base model has dovetailed white dot sights, but there are models with tritium night sights for an extra $100 in MSRP. The standard model is Beretta's F system, wherein the controls are a decocking safety. You can also opt for the G (decocker only) D (double-action only) or C system, or "constant action." The C model is single-action only, returning the hammer to the half-cock position...but there's no safety or decocker either.

Let's kick off this Beretta PX4 Storm review with the party pieces: the rotating barrel and the polymer frame.

A rotating barrel spins during the recoil cycle, then returns to lock-up as the slide goes forward a lot like how the camshaft of an engine spins. Without fully explaining it (and wasting a whole bunch of time on a pointless aside) the gist of it is the barrel never goes out of alignment, and more recoil energy is essentially bled off.

Does it pay any dividends? A little less recoil while shooting. It's a cool feature, though not a game changer.

The other big story with the PX4 Storm is the polymer frame, which reduces weight dramatically. Classically, big Beretta 9mm pistols have been substantial. While that tamed recoil, it made carrying one a pain. The PX4 series loses a few ounces, with the full-size variant weighing a rather manageable 28 ounces.

The frame features swappable grip/backstrap panels, so you can get the fit you want. The tail of the frame allows for a natural high and tight grip on the pistol.

Another interesting feature is the rear of the slide, which acts as a partial hammer shroud when the hammer is down, which makes the pistol a little more concealable compared to other DA/SA handguns.

Some other good touches include the sights, which are dovetailed and thus allow the user to upgrade them or change them as they see fit. Unlike the classic 92, the Picatinny rail also allows use of a weapon-mounted light if so desired.

Ergonomically, the PX4 Storm is excellent. It's comfortable to hold, accurate and controllable under recoil.

The trigger is very good, smooth in double action with minimal stacking. The single-action trigger has a bit of creep - almost all double/single pistols do - but not too much, and a clean, crisp break.

Ultimately, it's a very sweet shooter, with some very smart features. Unfortunately, the PX4 just never got the cachet in the market that it deserves, but for the interested buyer that can pay dividends as dealers will sometimes just want them out of their inventory and offer a great deal. As a result, finding one for less than $500 is not difficult, and at that price point...it's a steal.

As a nightstand gun, it's an excellent pick. While the PX4 Storm Compact is a bit better suited for EDC purposes, some people prefer to carry a full-size pistol. If you wanted to conceal and carry a full-size double/single pistol every day, this would be our first choice without hesitation.

GET YOUR BERETTA PX4 STORM HOLSTERS

← Previous Next →
Related Posts
6 Comment(s)
Fred Nichols
I own 2 storms, compact 40 s&w and 9mm. A pleasure to shoot and full of safety features that you don't find on other pistols.
Reply
William Smith
I love my PX4 Storm, full, 9mm. Just a small concern about it. After a year of ownership, you ask others about the Storm, search for opinions and there likes and dislikes. The concern is that not many people want this pistol, nor care for it. WHY?
Reply
William Smith
The Best! The rotating barrel, competition replacement of the hammer, replacement of the firing plate-form assembly, and convert from a F to a G decocker system, no safety. The rotating barrel is a must and recoil/muzzle flip is reduced
70%.
Reply
Geoffrey A Pfister Sr
I just got the full size today, but have had the compact for carry since it first came out. Another feature is that they dropped the centerline of the barrel lower to help with recoil...which makes a big difference, especially with the compact that doesn't have the ratcheting barrel of the full size. I would put them up against any other competitor. I prefer a manual safety and a hammer...you can't see what status the striker is in...most are cocked. Too many instances of people drawing, or handling one and they go off. Love my Beretta's...safe, predictable, and never any issues.
Reply
Jon L. Smith
Thanks for the review, I believe you tipped me over the edge to purchase one, everything you mentioned as pluses for the PX4 Storm are all of the things I wanted in a full-sized firearm. Thanks again, Jon
Reply
Curt Hays
After all the love for CZ, THIS would be your first choice for CCW if choosing a full size DA/SA?! Very interesting.

Even over a P-09?
Reply
Load more comments