The magnum revolver craze is long over. There's no reason to buy or shoot a pistol that beats you up, and there are a number of reasons why you'd want to consider a pistol and caliber that produce less recoil than a standard service pistol like a Glock, M&P, Sig Sauer or what have you.

Older people and novices may be too recoil sensitive, or you may be selecting a backup gun/pocket pistol and don't want to deal with the snap of a micro 9mm or .380 pistol. Or it could be that you have seen the light that less kick means easier shooting and hitting the target is what matters first and foremost. Whatever you're reason might be, let's talk about some good choices of a softer-shooting gun.

What Recoil Is And What Decreases It Recoil is simple. Isaac Newton taught us that every action has an equal and opposite reaction. A bullet is fired from a gun sending force downrange and the same amount of force back into the shooter. Since your hand is holding the gun in place, the force going backward also causes the pistol to try and rotate around your hand, causing the muzzle to rise.

The idea is to control and reduce the force that's directed back into the shooter and also the muzzle rise.

There are a number of ways to do that. A heavier gun, which "soaks up" the recoil energy, and a lighter caliber - less energy going out means less going back - are the easiest. Adjusting spring rates can have an effect by slowing down the slide, and adding a compensator can direct exhaust gases so the muzzle doesn't climb as much. However, the latter two are aftermarket modifications; you have to buy a gun and then do stuff to it to get the effect.

But we want a gun that recoils less from the factory. Here are a few that are going to kick a heck of a lot less right out of the box. Micro pistols in .380 ACP are (and have always have been) known to be snappy, but Ruger offers an LCP II in .22 LR. The Ruger LCP II Lite Rack was created - according to Ruger's marketing - as a "training gun" so you could shoot a .22 but carry the .380, but it may actually be the smarter pistol of the small Ruger autos.

.22 is a more viable caliber for self-defense than some realize; with quality ammunition it's reliable and can penetrate deeply enough in tissue to cause vital damage, so don't sell it short. In a tiny gun, it's going to barely recoil at all, the slide is easier to manipulate, and capacity is 10+1 rather than 6+1, and the gun weighs less than 12 oz unloaded.

The only hitch seems to be ammunition "preference," meaning some shooters have reported that some ammunition (usually the cheap stuff) doesn't run reliably, but there's an ignition kit available from Galloway Precision that's known to improve any ammo reliability issues.

It is fairly light, 20 ounces loaded. It uses .22 Mag. cartridges, making recoil as light as a summer breeze. Its magazine holds 30+1 rounds, combatting the low stopping power of the lighter ammunition by offering a higher volume of bullets to unload.

The .22 Magnum makes a little more noise than the .22LR, but that hardly makes the PMR-30 hard to shoot. The full-length grip, fiber-optic sights, soft trigger and easy-to-operate slide make this a fantastically comfortable gun to shoot, even for extended shooting sessions A 9mm 1911 is ol' Slabsides on cheat mode. An already heavy gun in a lighter caliber makes for easy shooting. You also get increased capacity; magazines are 9+1/10+1 for a full-size gun, which makes a difference. Or you can get into the double-stack guns like a 2011 and capacity is no longer an issue.

However, proceed with some caution.

The 1911 as a system relies on proper spring rates and having the right magazine to function correctly, and the 9mm versions have been known to be a little more prone to being finicky. Having to tune the gun with a different mainspring and recoil spring and testing multiple brands of magazines to get optimal reliability is not unheard of. They're also known to be a little more ammunition-sensitive, so make sure to vet any carry loads. Ruger offers the LCR snubby revolver (and the LCRx, if you like having an external hammer) in .327 Federal Magnum.  The smart guy trick is to not shoot .327 Federal, because it's snappy in a light, compact revolver. Much like a .357 Magnum revolver being able to fire .38 Special, any pistol that can fire .327 Federal Magnum can also chamber and fire .32 H&R Magnum, .32 S&W Long and .32 S&W Short, which are much softer-shooting than .327 Federal.

A number of shooters report .32 S&W Long barely produces any recoil, and a number of loadings have demonstrated the necessary performance (12"-18" penetration in ballistic gelatin) to be tenable for concealed carry, even through the 1.87-inch barrel of a Ruger LCR. .32 H&R is generally held to softer than .38 Special in a snubbie as well.

The other benefit is that you get 6 cylinders instead of 5. 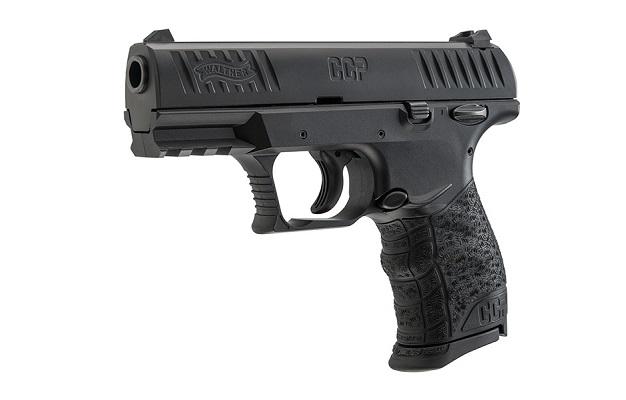 The Walther CCP uses a novel gas piston system instead of the short-recoil operation of...basically most handguns...which makes the 9mm version a little softer shooting than other compact 9mm pistols. In .380 ACP, the recoil is almost nonexistent.

The hitch with most .380 pistols is they're tiny, making them unpleasant to shoot. The CCP M2 .380 is a compact single-stack, so it's easy to control. Since it doesn't need the stiffer spring rate of a typical striker-fired pistol, the slide is easy to manipulate as well.

Walther makes some outstanding pistols. The PPQ, PDP, and Q5, in particular, are exceptional...but anyone who has fired one can testify to the CCP M2 .380 being a real sleeper in their catalog.

A modern pistol that almost all shooters report as being much milder in recoil than any other is the Beretta PX4 Storm. While the DA/SA trigger system and its controls require some practice to get proficient with, a lot of owners report the gun will reward that practice with a softer recoil impulse than most modern service pistols and one of the better factory DA/SA triggers.

The gun's party piece is a rotating barrel, which cams inside the slide rather than tilting, which most modern pistols do as most handguns are based on the Browning short-recoil/tilting barrel system. The theory is the rotating barrel disperses recoil force instead of directing it into a locking block or slide stop pin, which is where most of the mechanical stress from recoil accumulates.

A lot of top shooters and trainers have said the PX4 is the sleeper in Beretta's catalog due to its qualities. If you wanted a more modern 9mm pistol than an old-school Wonder Nine but find the poly-striker guns to be a bit too snappy...this might be the ticket. One of the best ways to soak up recoil is with more mass, and the Ruger GP100 definitely brings that to the table. It's a tank, which is the only real drawback of the GP100.

The gun was designed and made from the ground up for .357 Magnum, and it shows. While shooting .357 Magnum is certainly softer than some other 4-inch revolvers, loading .38 Special or .38 Special +P is basically cheating. There's almost no recoil at all.

You Are The Best Judge Of Recoil

Opinions will vary on what is acceptable recoil. Go to a range that rents guns and try a few out for yourself. Spark a conversation with another carrier and see what they have to say. Certain firearms may be too snappy for some but completely manageable for others.

Like any other recreational or self-defense option, one size does not fit all. Part of minimizing recoil is practicing with a firearm until one is used to it, but starts with choosing a gun that serves you best along the way.

← Previous Next →
Related Posts
8 Comment(s)
Mick Foster
I cannot believe this inept fool list a 357 as a "low recoil" gun!!!!!
Reply
Dean Speidel
I definitely wouldn't recommend any mini semi-auto .380 for recoil sensitive folks. Also, wouldn't recommend .22 LR or .22 Mag for self defense. GP100 too heavy to carry.. S&W 60 is a maybe. Beretta PX4 is a good possible.

Low centerline-of-bore-to-top-of-hand designs (i.e. CZ P07 and similar) will reduce felt recoil. Maybe consider a revolver with anti-recoil porting on top of barrel? Another option to include in concert with these two design features is staying away from +P loads and looking for low velocity loads.
Reply
Robert Hoffman
For a lower recoil 9mm, you should give the Walther CCPM2 a try. The gas retarded slide on that model takes the recoil snap out of the lighter weight 9mm. It has a more controllable recoil than any other 9mm I've shot.
Reply
LaVern Johnson
I was at a gun show where you could take a handgun and fire as many rounds as you wanted to buy. I first shot a Shield 9mm. Not bad for recoil.
The I fired the .45 Shield. It actually felt like it had less recoil! I think the .45 recoil was a push straight back whereas with the 9mm the recoil was
pushing the muzzle up.
Reply
Mark Telep
One item I didn’t see you mention is porting. Porting elevates recoil proportionately, in much the same manner as adding mass to the firearm. The trade off is a louder report when the gun is fired. To some this is a better trade off because you can effectively carry a larger round, with a lighter firearm, and shoot better.
Reply
Jason K Stripling
M&P SHIELD 9 M2.0 Performance Center. You failed to test it. Shame. It has the least recoil that I have ever experienced.
Reply
DEBORAH CIESLEWSKI
The Masada recoil for a handgun this size, isn't bad at all,it actually is a nice handgun comes with mounts to put on sights, and it's for 4 different models.Well made gun and can take a beating.
Reply
Bora Ozbek
Interested at low recoil accurate revolver news
Reply
Load more comments