There are very few true left handed hand guns, and indeed few made for lefties in general including long guns.

Today, there's a lot more in terms of choice.

Today's left-handed shooter will find precious few pistols made specifically for left-handed shooters, but CAN find a good number of guns with ambidextrous controls that makes left-handed operation easy. In some cases, you may have to swap the magazine release button...and others will not.

But what are some of the best to look for? Here are 7 top left-handed handguns that should be on your radar. 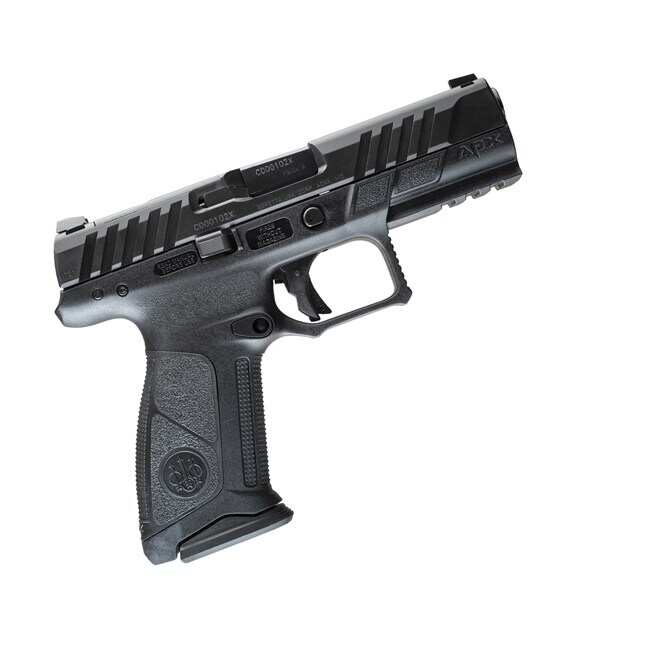 Beretta has replaced the APX in their lineup with the APX A1, a full-size poly/striker pistol with a 17/15/10 (depending on magazine) capacity.

The APX A1 has an upgraded trigger over the original, swappable grip panels and comes optics-ready. The slide release is ambi, and the magazine release is swappable. The only control that isn't is the takedown lever, but that is also the least important one!

The APX before it and APX A1 are sleepers, in that they are reliable, rugged, and have a very decent factory trigger. You won't find a pistol of this type from another major brand that's this good for as little as they go for. Previous generations of Glocks required a left-handed shooter to learn the slingshot method of running the slide and swapping the magazine release.

There's a reason a lot of people deem the Glock 19 as a go-to concealed carry pistol, and now it's more left-friendly. Named for the ancient fortress, the IWI Masada pistol is IWI's entry into the polymer-frame, striker-fired pistol format. While they might be known for their DA/SA pistols and long guns, the Massada is their sleeper as it's staggeringly good.

Outstanding ergonomics making for an easy high, tight shooting grip. A very good trigger press. And actually ambidextrous magazine and slide releases, so it's ready to run left-handed right out of the box. Except the takedown lever, but that's sort of par for the course.

The real pity is that this gun, like many other excellent pistols, is easily shadowed by the bigger name brands in the business. You really shouldn't overlook this handgun. The Walther PPQ has been replaced in their product lineup by the PDP, or "Performance Duty Pistol," essentially an updated PPQ. The PDP has many of the same virtues, including best-in-class ergonomics and an outstanding factory trigger.

The PDP, like the PPQ before it, is one of the most lefty-friendly pistols on the market. The slide release and takedown tabs are ambidextrous from the factory, and the magazine release button (no paddles this time...more's the pity) is swappable.

The PDP is available with 4-, 4.5- and 5-inch barrel lengths, and 15-round compact or 17-round full-size frame sizes. There is also an F model optimized for female shooters, with a reduced-radius grip and tuned spring system for easier slide manipulations. Most hammer-fired DA/SA pistols have right-hand only controls, but the CZ P07 adds a little left-hand functionality. The CZ P07 has CZ's Omega trigger system, in that the user can use either a decocking lever or install a manual safety instead for cocked and locked carry like a 1911.

The magazine release is also swappable, so the only thing you'd have to train around is the slide release/takedown pin. However, if you wanted a hammer-fired pistol instead of a poly-framed striker gun, this is one of the few that can be operated as a left-handed pistol.

It's also a thoroughly modern DA pistol, with a smooth DA pull, crisp single-action press, accessory rail, polymer frame for easier packing and swappable backstraps for the perfect fit. It's actually one of CZ's best pistols. It's almost the same dimensions as a Glock 19, so it's also a fantastic concealed carry gun.

This has become a fan favorite amongst southpaws. In terms of ergonomics, the HK VP9 absolutely destroys the competition. It's a striker-fire pistol with ambidextrous controls (magazine release, slide release) that has some very unique design features that set it apart from many of the other striker-fire pistols out there. It's now available optics ready and with a (swappable) magazine release button instead of the paddles.

The Only Left-Handed Subcompact. Savage Stance. 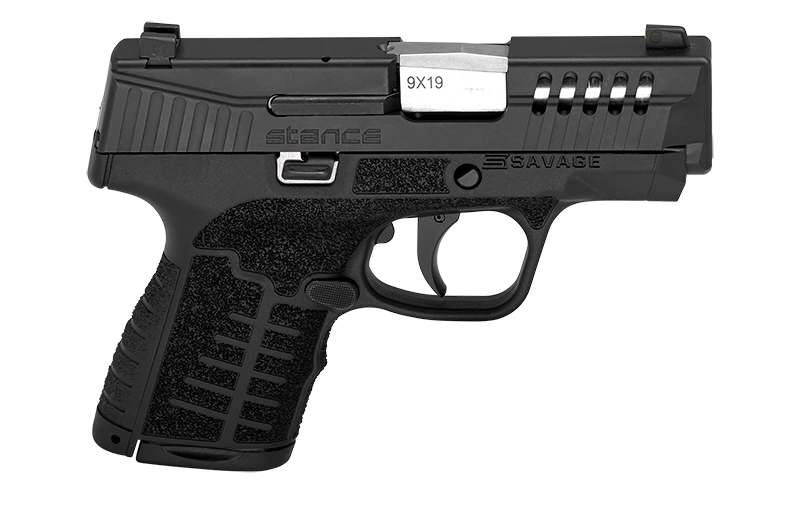 Eagle-eyed folks will notice something familiar about the Savage Arms Stance pistols, with good reason. The Honor Defense company went belly-up just before the COVID-19 pandemic, but the intellectual property (and presumably some tooling) was sold to Savage Arms, who decided to get back into handguns after a nice long rest...of about a century.

Some might have preferred to get the 1907 back, but that's for another time.

The Savage Arms Stance is a slim, single-stack subcompact much like the S&W Shield, Glock 43 or what have you. The slide release is ambidextrous, as is the magazine release. The only control that isn't is the takedown lever, and that's the one that just doesn't matter.

Accessory rail for a light/laser? Check. Polymer frame for easier toting? Check. Swappable magazine releases? Check. They also add a rotating barrel, which helps dispel gas more efficiently and reduces recoil, and equip the pistol with one of the better double-action triggers on the market. For fans of old-school operating systems, it's frankly one of the best guns to buy.

It uses Glock-style takedown tabs, so field-stripping can be done without switching hands if you're left-hand dominant, and - as mentioned - you can also swap magazine releases. As with Berettas, the decocker/safety can be operated with either hand. You'll have to learn to run the slide release with the index finger rather than the thumb, but it's a small price to pay for such an excellent pistol.

The best way to test if a left-handed concealed carry pistol is right for you is to test drive it at the range. This will give you a very good feel for how the pistol operates within your hands – not just how it looks in the display case.

And just remember – All Alien Gear Holsters are available with a left hand option. Simple select left-handed or right-handed preference at checkout.

← Previous Next →
Related Posts
19 Comment(s)
adi
Thank you for a very insight-full article. Maybe add pistol thicknesses as well ? single /vs / double stack
Reply
Your new dad
do your own research. stop being lazy.
Reply
Marshall Watkins
I used to own and use a .45 ACP. I would go to the gun club and fire it frequently. I noticed the recoil and ejection of the shell was coming from the right side. After getting burned from the hot casing which struck my forehead, I started to pull the trigger erratically. I have been searching years for an ACP that ejects the shell to left. I have yet to find one suitable for left-handed use.
Reply
Edd
That photo with the last Baretta looks more like my Springfield Mod 2. It is also a good southpaw weapon, in my opinion. With the trigger and grip safeties, along with the ambidextrous mag release, I have no trouble with it.. As for hostlers in my book Alien Gear is top of the line.
Reply
James
Ambidextrous controls do not make a pistol suitable for left-handed use. The pins used to give a southpaw access to the controls are a weak point.
Also, rifling creates spin for the projectile. That spin creates torque. Which, in turn, pushes the grip into the palm of a right-handed shooter. That torque becomes another obstacle in the hand of a southpaw by twisting the grip away from the palm. This isn't address in a firearm with ambidextrous controls.

There is currently only one company manufacturing true southpaw pistols. Their cheapest offering is around $4600 US. It's a custom built 1911 and, while it's likely worth every penny, I don't have that many pennies to dedicate to the purchase of a single firearm. If Glock, S&W, SIG, Ruger, or any other quality manufacturer were to offer a true southpaw pistol, I'd be all over it. Even at a premium. I've already proven it with long arms.

Reply
John
Ambidextrous features does not make it a left-handed pistol, a left-handed ejection port does that.
Reply
Robert
Amen!!
Reply
Dan
If cash is not a problem look at the Cabot guns southpaws! if you want a true left handed simi-auto pistol this is the only current manufacturer. I’m hopeful that will change with an affordable option!
Reply
Jesse
It's the discharge that's the problem. Hard to focus on the next shot when casings are blazing across your face.
Reply
RwLambert
The Bersa TPR9 series is completely ambidextrous (safety/decocker and slide release, swappable mag release). I have the compact TPR9c. It also comes as a full size TPR9 and the competition model TPR9xt. They are also available in .40 and .45.

Reply
pmolenda
I have a new Berretta PX4 storm compact and it has slide release on both sides. That's why I bought it, excellent FULLY left-hand pistol.
Reply
TPD
Not having the M&P in this list is a joke, right? Best leftie gun out there.
Reply
bob
In this day and age of CNC manufacture one would think it trivial to make mirror images of ANYTHING! Thus giving the left-handed 11% of the population true access to real firearms.
Reply
Nick
Got my IL CCL/FOID a few years ago. But I've held off on buying a handgun because the people in my class and my instructor described the process as similar to finding a wife. Every little detail matters, And one has to find a gun that "fits". Everything comes into play: recoil, grip, barrel, size, etc.

I want a true left-handed handgun. My instructor told me I was SOL. He was right. This list is a lie. Many of the guns on it are not for southpaws. They are ambidextrous. Others can be modified for lefties, but are true left-handed guns.

Furthermore, the picture at the top is poor for this article. It shows a left-handed shooter, but nothing in the article is as advertised. Everything here is ambi. What a waste of my time.

Reply
James
Sig Sauer P250/P320 you can move the magazine release to the other side (I own both in .45 acp)

Ruger American handguns are setup for both left and right hand users (I have one compact and one pro full size both in 9mm)
Reply
David Horne
No FN’s on the list? My first choice!
Reply
Michael Allen
oh we who forget the wheel guns...
just bought a Charter Arms Southpaw in 38 spl. A true left handed revolver . My auto loader is the hard working Ruger P95 with ambi decock/safety and mag release.
Reply
CJ
The Gen 5 Glocks now have fully ambi slide release. Meaning, it's on both side of the gun now. The mag release can be moved to the other side (that's been around awhile) for setting the gun up for full-left handed use.
Reply
Robert
Your comment about revolvers...I can only think of one that is for lefties; The southpaw. When the cylinder opens to the left of the gun; a right handed person has no problem reloading while maintaining the weapon in his/her right hand. As a lefty; I have to either reach around the gun to load with my right hand, or put the gun in my "right" hand and load with my left..then return it to my left hand for shooting...revolvers are right handed guns too.

However, thanks for your article...I did enjoy it.
Reply
Load more comments