6 Things You'd Be Amazed To Learn About The Desert Eagle

6 Things You Might Not Know About The Desert Eagle

The Desert Eagle is an iconic handgun. A lot of people consider it a bucket-list handgun, a pistol they would love to own at some point, and it's been in a number of iconic movies, TV shows and video games. It's become a part of gun culture, for good or ill.

A lot of people see one and just think "big gun...big bullet make big boom...me want one" but there's a lot more than meets the eye with the Desert Eagle. It has a clever design that would somewhat defy the reputation it has as a gimmick gun.

Granted, it is also a gimmick gun and aggressively impractical for the most part. But then again...who says cool guns have to be practical?

So what's so cool about the Desert Eagle besides it just being a big gun?

The Desert Eagle Is A Commercially Successful Semi-Auto Magnum

The Desert Eagle is a rarity, in that it is a commercially successful semi-automatic magnum pistol. It isn't so much that nobody made any; it's that basically all of them failed commercially.

Over the years, a lot of different designers and companies have tried to make a semi-auto pistol with big bore magnum power only to fail. The first emerged in the 1970s, with guns like the AMT Automag and the Wildey Magnum...but the Desert Eagle had something a little different.

You see, the boutique auto magnums that have come and gone all use proprietary ammunition, which is (and always was) hard to get as well as expensive.

The Desert Eagle was designed so the magazine and feeding/extraction system works with rimmed cartridges, so existing magnum calibers (.357 Magnum, .44 Magnum) work with the Desert Eagle. Unlike AMT and Wildey pistols, you don't have to worry about the supply of an uber-niche cartridge.

While the gun is not really "affordable" (MSRP is almost $2,000) the ammunition is, or at least can be, and is actually available...unlike other auto magnum cartridges are or ever were for that matter.

Recoil Is Not That Bad With A Desert Eagle

The Desert Eagle chambers and fires some very powerful calibers as far as pistol cartridges go...but just like a big ol' honkin' revolver for a big ol' bullet, the sheer mass of the gun absorbs a lot of the recoil, so it's not as bad to shoot as you'd think.

The Desert Eagle Works A Lot Like A Rifle

An interesting feature of auto magnums, including the Desert Eagle, is that conventional pistol firing systems aren't able to handle the internal ballistics (the pressure, recoil energy) of big bore magnum cartridges, so a different design has to be used.

Most of the time, auto magnums use a scaled-down version of rifle firing systems.

The Desert Eagle specifically works a lot like an upside-down gas piston rifle, closest to an AR-18 in design than anything else . The reciprocating portion of the upper is essentially a bolt carrier group, with a rotating bolt with radial locking lugs just like a rifle.

There's a gas port on the bottom of the barrel by the muzzle, leading into a gas chamber. The bolt carrier/slide has a piston at the forward end, which seats into the gas chamber when the gun is in battery.

When it fires, gas blows the piston back, the bolt cams in the carrier (ejecting the spent case) and the dual recoil springs/recoil rods (a la the AR-18) compress to return the slide/bolt carrier to battery and chambering the next cartridge from the magazine.

So while it's a pistol, it does not have an operating system anything like any other pistol. Classically, semi-automatic pistols are recoil-operated or blowback-operated, whereas the Desert Eagle has a short-stroke gas piston.

Contrary to popular belief, the Desert Eagle does not have an AR-15 bolt. It is similar to the AR-15 bolt at first blush but it starts to get very different in a hurry as you look a little closer. The extractor looks similar, and it has radial locking lugs...but that's about where the similarities end. 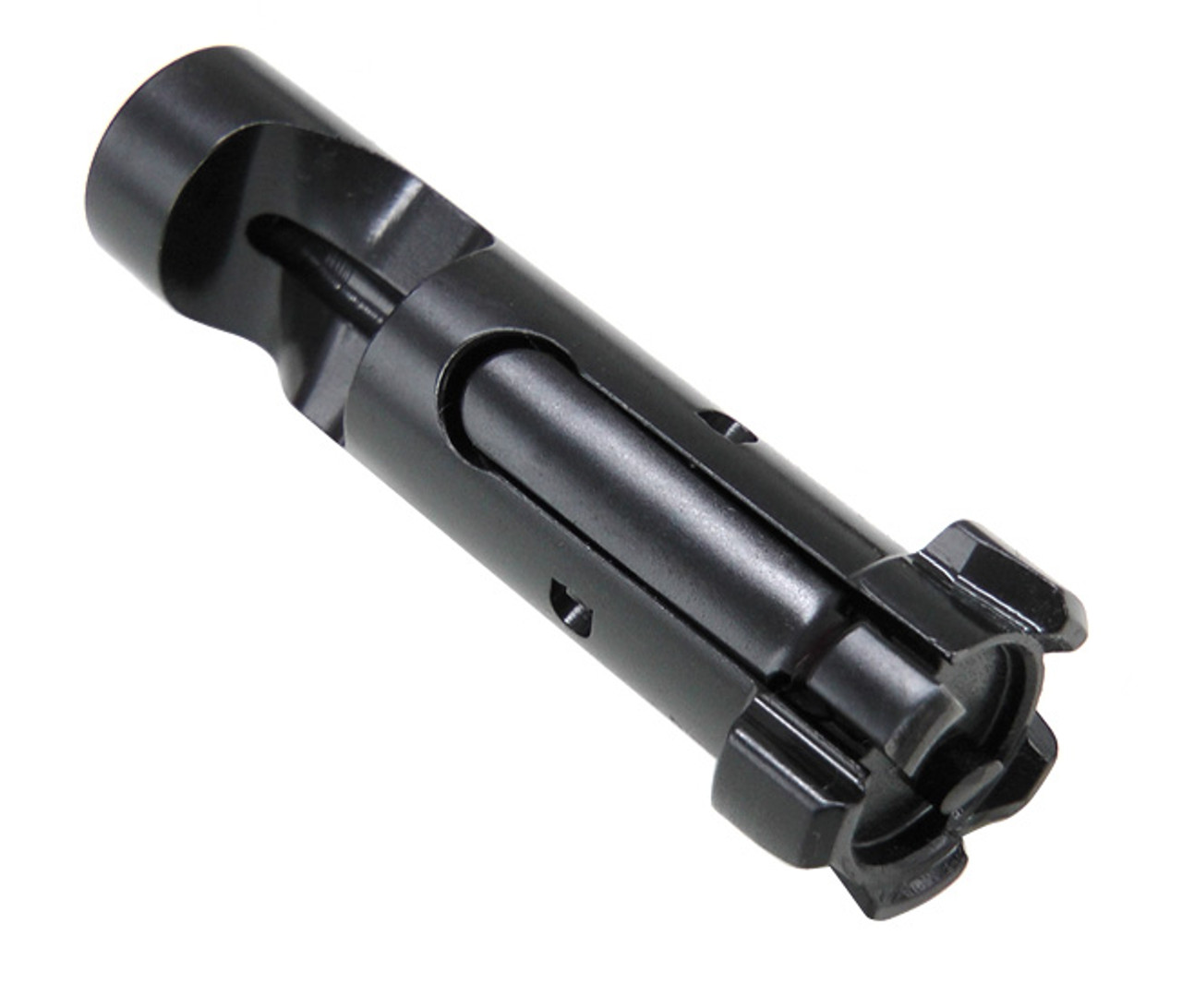 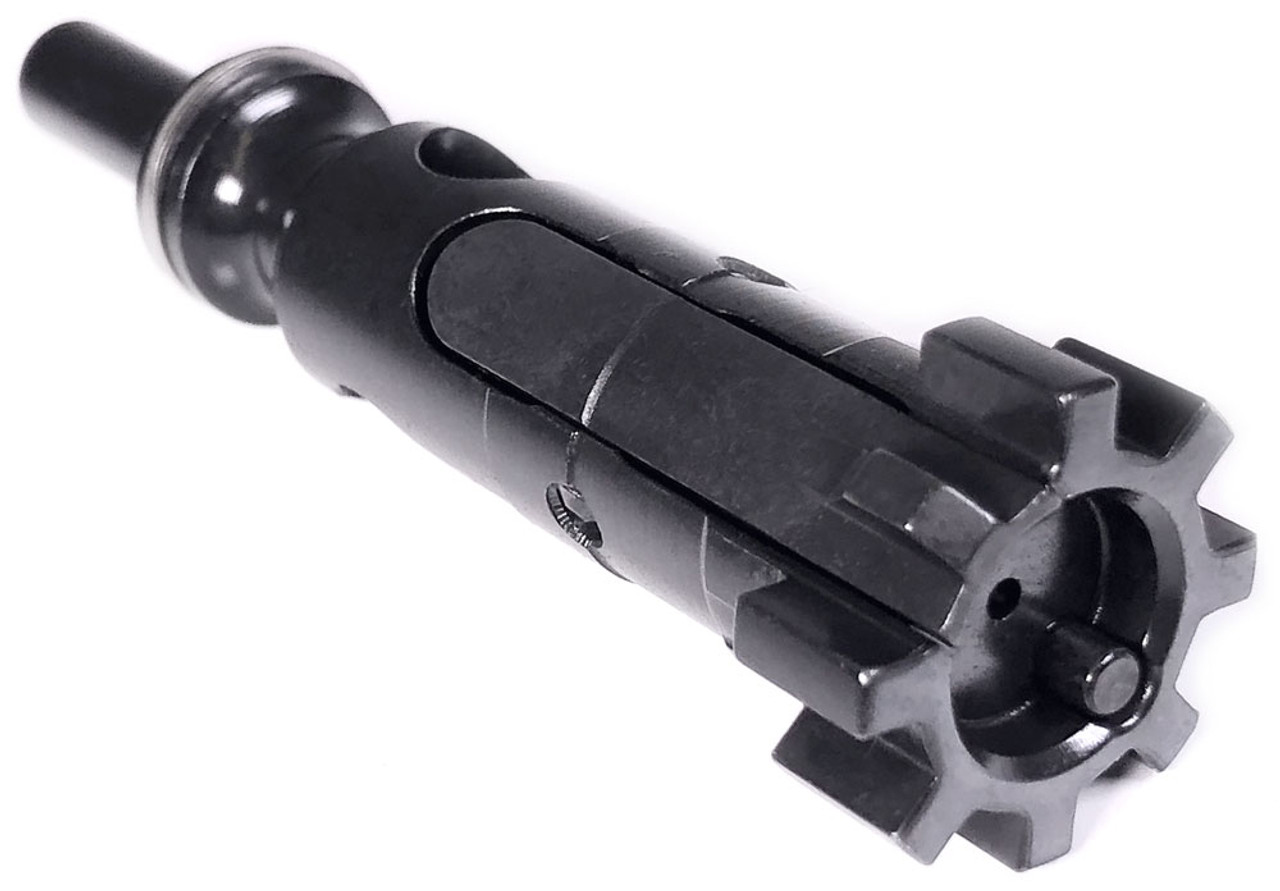 As you can see, there are some very superficial similarities...but they are very, very different.

If You Want To Make It Worth It...Get The Caliber Combo

If you were serious about buying a Desert Eagle, but wanted to get the most bang for your buck...look at the caliber combo packages. They come with at least one additional barrel (if not multiple barrels and magazines) that allow the owner to swap calibers at will.

Why does that matter?

Frankly, .50 AE is not easy to come by in the best of times, and .44 Magnum is - again, even in ideal circumstances - also not the most common or affordable. However, .357 Magnum is more plentiful and common, so if you wanted to have a hand cannon and be able to shoot it...having a Deagle in .357 Magnum or that could be converted to it would be the smart move.

The Baby Eagle Is Barely Related At All 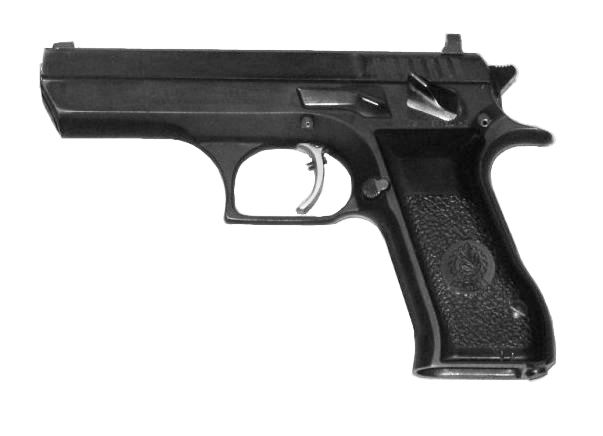 They have a similar appearance. The word "Eagle" is the names. And that's where the similarities between the Desert Eagle and the Baby Eagle end.

The Desert Eagle, a single-action pistol almost unlike anything else except maybe an AMT Automag, was designed and originally manufactured in Minnesota. Today, they're made in Virginia.

The Baby Eagle, a DA/SA pistol, was designed in Israel parts and design input from Tanfoglio (who specialize in very, very good CZ clones) and has always been manufactured there.

The two pistols share some superficial qualities and at one time shared a parent company, but that's about it. Other than that, they really have nothing to do with each other.