Glock 19 vs Glock 26: Which Is Better For Concealed Carry?

Glock 26 vs 19: Reading Between The Nines

Some people accept nothing other than a 9x19mm Glock, and if you're going to carry one on the daily, that inevitably leads to deciding between the Glock 19 vs. 26. Both of these pistols are wildly popular among police officers and civilian carriers. Take a peek in basically any gun store, and they'll have both of them behind the counter.

But which to get?

Both guns are solid choices, but each gun has a couple of minor drawbacks that will make one a better choice for some people. It's like getting a car; plenty of people like pickup trucks, but it's not a very good choice if you live in an urban environment. Likewise, a Mini Cooper probably isn't the best choice if you live out in the sticks.

So really, it comes down to what's best for you. But what is going to make one better than the other? We're going to find out.

The Glock 19 is more or less a "Goldilocks" gun. It's big enough to hang with the full-size guns in terms of accuracy and performance. It holds 15+1 of 9mm and will even run 9mm +P, which is on par with most service pistols or close enough that it makes little difference. It will even accept Glock 17 magazines for an additional two rounds of capacity if desired.

However, it's also small enough for shooters with smaller hands to use well, unlike many of the classic service pistols like the Beretta 92, Sig Sauer P226, CZ 75 or a 1911 which can be bigger than some people are willing to deal with.

The 19 is also small enough for most people to conceal fairly easily. Granted, it's also a tad big compared to other compacts.

The Glock 19 has a 4-inch barrel, with an overall length of 7.36 inches. The gun is 5 inches tall, and is 1.18 inches wide at the slide. Unloaded, it weighs 23.65 ounces but only goes up to 30 ounces once loaded. Trigger pull is commonly held to be 5.5 pounds, though that can vary a bit per each individual gun you find in stores.

Everything you need, nothing you don't, and in an easy to use, easy to learn, reliable and accurate package. Aftermarket support is ridiculous and they don't even cost all that much; you can pick one up for $450 to $600, depending on the store and circumstances, and less on the used market.

What else could a person actually want?

Well, a smaller gun that's easier to conceal, which brings us to:

The Glock 26: Portable, Potent and Packable

The Glock 26 was conceived as a small handgun for the concealed carry market and as a backup gun for law enforcement, and it has been a very popular pistol for that application since it was released back in the mid 90s.

As far as subcompacts go, the Glock 26 has a lot going on for it. It's compact enough to be easily carried and concealed. However, it's big enough to avoid the usual pitfalls of pocket guns. The G26 has sufficient barrel length to get some performance out of ammunition and to preserve accuracy.

It's slim, but also has a decent capacity; it holds more rounds than some full-size guns (Sig P220, 1911, etc.) so you can actually carry a decent supply of bullets.

It's also compatible with Glock 19 and Glock 17 magazines, so you can increase the capacity by swapping magazines. In fact, a lot of people carry a 26, but use a G19 magazine with a grip sleeve.

Just like the 19, aftermarket support is ridiculous. You'll find it in basically every gun store. Thousands of people carry them everyday, either as a primary carry gun or as a backup. However, the specs of each gun...don't matter all that much, as they really only give you part of the story.

What matters is what makes a gun good for YOU. How, then, is a person supposed to narrow the Glock 19 vs 26 decision down? 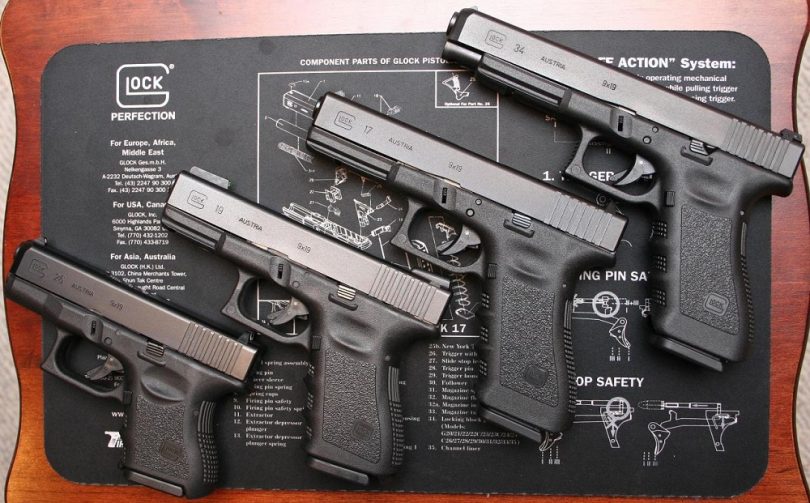 *Glock doesn't publish MSRP, per se. We took a quick look at a few popular online retailers. Your mileage may vary.

Deciding Between Glock 19 vs Glock 26: What You Need From A Carry Gun

Truth be told, no matter which gun you pick between the Glock 19 vs Glock 26, you're getting a solid firearm. Both are accurate, reliable, and shoot very well. Granted, neither is a tack drivin' sniper pistol with a custom shop trigger. Glocks are merely hard working guns that will go "bang" when you need them to and will generally hit what you aim them at.

Everything you need, nothing you don't...but you'll probably find one is better for you than the other.

The Glock 19 occupies a fantastic middle ground between a service pistol and a carry pistol. They're compact enough for most people to carry every day, but some people find them too big to conceal well without layers or may find them uncomfortable to carry. Ultimately, if you can't easily or comfortably carry a pistol, you're going to find excuses to not carry it which a few people ahve done with their Glock 19.

The Glock 26, on the other hand, is small enough for just about anyone to conceal and carry it every day. With the stock magazines, you do lose a bit in terms of capacity but 12+1 is fine for an EDC gun...though you could carry with a Glock 19 magazine with a grip sleeve.

However, the 26 also has a fairly short grip. A lot of people find they can only get two or three fingers on the pistol, which makes shooting it a little awkward. Also, shorter barrels bring with them more muzzle rise. While the muzzle rise of a compact 9mm is much less than that of a .45 and is laughable compared to that of, say, a .44 Magnum, a smaller gun in 9mm can still be a bit lively.

Granted, very few people are going to have issues with a Glock 26, though shooting +P may snap a bit, but some shooters might find it a bit livelier than they want. For the extremely recoil sensitive, the 19 will be the easier pistol to shoot.

The best thing to do is to handle both and shoot both. Get to a gun store or range that rents guns out for testing purposes. Shoot both, get a feel for them. You'll get an idea for which one you'll be most confident with, which will be the one to acquire. Use our free 8" x 11" target when you head on out to the range!

← Previous Next →
8 Comment(s)
John Smith
A Glock 26 is 10+1.
Reply Mar 26, 2020 14:32
Kevin C.
Great article and very helpful. This helped me make my decision, but I ended up getting both pistols. I plan to carry the 19 whenever I can, simply because I am more accurate with it, and it also doubles as my home defense weapon. The 26 is perfect when it’s too hot to wear more than a T-shirt or if I’ll be doing activities that would make the 19 less comfortable. Both are excellent pistols and I think most people would be completely satisfied with either (within reason I mean. Obviously someone who has been using DA/SA for the last 20 years might not enjoy striker fire weapons as much, etc). Thanks again for the article.
Reply Mar 26, 2020 13:16
Troy
I have both and the deciding factor which one I carry depends on the weather, and my clothing. I live in Glendale AZ so the weather is warm 8 months and cooler 4 months. Summer time you can almost guarantee it's the 26 unless I have a big shirt, I feel comfortable with either one on my side and yes the 26 has a smaller grip but I bought Pmags that hold 12+1 and have a pinky spot that are superior to the OEM. Continual practice brings great confidence and I take both to the range and switch out on the fly for proficiency so no matter which one is riding on my right hip I dont have to think, it's natural. I also have them set up identically with grip, recoil spring and sights so they operate pretty closely minus a bit more recoil on the 26. But let's face the true facts, if we ever have to use our weapons the recoil isn't going to matter as much as the effectiveness of proper placement of the projectiles. I can barely tell the difference on target between the two. Just my 2 cents!
Reply Mar 22, 2020 22:06
CharlesCib
Awesome blog you have here but I was curious if you
knew of any discussion boards that cover the same topics discussed in this article?
I’d really like to be a part of community where
I can get responses from other knowledgeable people that
share the same interest. If you have any recommendations, please
let me know. Thanks a lot!
Reply Dec 11, 2019 08:22
JC
I carried a S&W MP 40 on the job and a Glock 27 concealed. I didn’t like the recoil along with a small grip so now I carry a Glock 19 concealed with with a “In the waist band” Holster. Never looked back.
Reply Oct 09, 2019 19:43
DC
The GLOCK 19, is most certainly one of the best firearms ever made... While not flashy looking, think you’d be hard pressed to find a more durable, more reliable gun on the market. It’s accurate, easy to shoot, comfortable- numerous backs straps to easily customize your grip, and you can shoot just about any ammo through it without any failures.... lastly, it’s a great value.
Reply Aug 26, 2019 06:37
Steve Parker
Very good article! I own several g19s and love how they shoot! I have a friend that carries his g26 daily with great confidence! He carries several 33 round clips as well! Lol. I think that when you can’t decide between two guns then the best thing to do is to buy them both and let time tell which suits you best! Sounds like a fair compromise to me!
Reply Dec 27, 2018 08:39
KC Delk
Great read. I’ve carried a G19 for almost 20 years. And like you said it’s never disappointed. I have been thinking about going to a 26 but think I will stay with “old trusty”. Thanks again.
Reply Aug 22, 2018 12:40
Load more comments