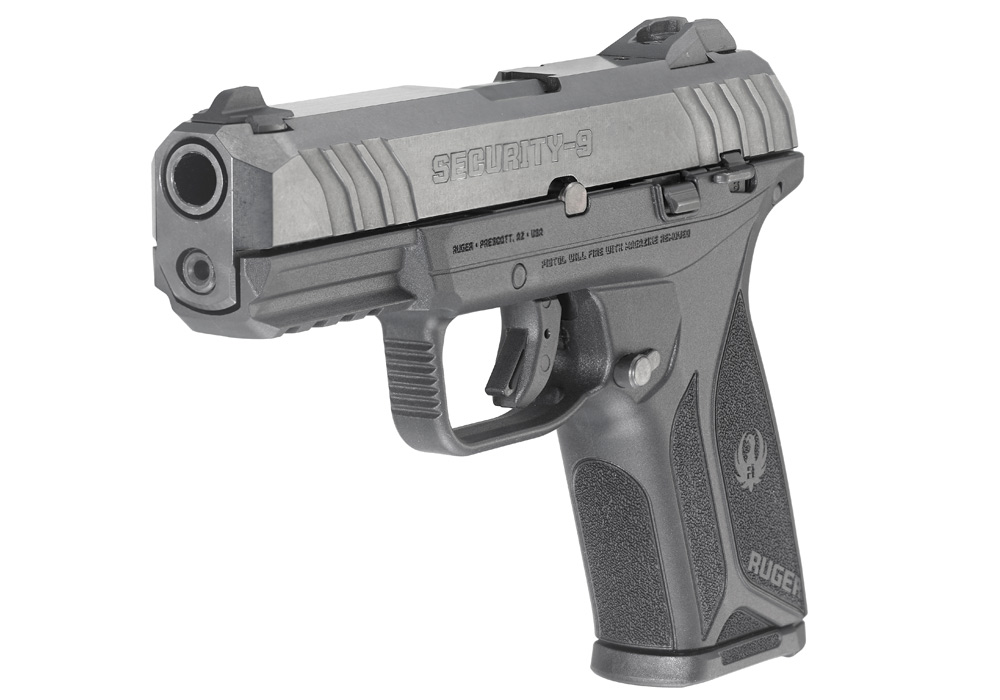 But nevermind the pricing; this is just a good pistol, full-stop. Is it perfection personified? Maybe not, but it makes some very popular pistols of comparable size and class seem downright overpriced by comparison.

Let's get into the Ruger Security 9 review. 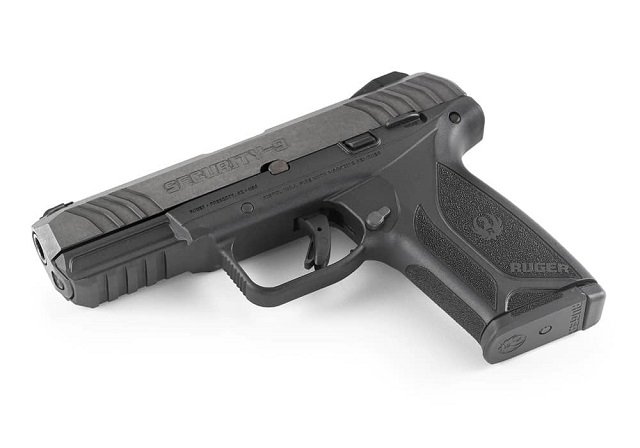 The Ruger Security 9 is something of a paradox. It's a value gun, but it has features normally found on much more expensive pistols. It doesn't feel cheap at all, it just feels solidly built. It's a rather simple gun, but you couldn't say it's completely unrefined.

The firing system is a slightly scaled-up version of the LCP, Ruger's uber-popular pocket pistol. Obviously, the Security 9 is made for the 9mm cartridge whereas the LCP is a .380. The LCP, for those unaware, is double-action-only with a shrouded internal hammer. You can't cock it; every trigger pull cocks and drops the hammer.

The Security 9 likewise has a shrouded hammer and is a DAO pistol, but the trigger spring system has been tuned for a light trigger pull.

The Security 9 is named as a reference to the Security-Six pistol, part a family of mid-size revolvers built for the law enforcement/private security market. The Security-Six was a double-action revolver platform built for the .357 Magnum cartridge, and was replaced in the Ruger catalog by the GP100. The original gun was a no-nonsense tank of a pistol, considered by many LEOs and revolver aficionados to be vastly more durable than the Colt Python and Smith and Wesson revolvers such as Models 19, 66 and 586.

The Security 9 seems to be made along the same lines, but is obviously a polymer-framed semi-auto. The only frills on the original were wood grips and target sights, but you get a few more perks with Security 9. Read the features list in any Ruger Security 9 review, and you'll scratch your head as to how the MSRP is only $379.

The barrel is 4 inches long. Overall dimensions are 7.24 inches long, 5 inches tall and 1.02 inches wide at the slide. The controls are very low-profile, so overall width is about 1.2 inches. Unloaded, it weighs 23.7 ounces. The magazine holds 15+1 rounds. In other words, a fairly standard compact pistol though a bit on the svelte side.

The frame, made of glass-filled nylon, has decent texturing, with a slight bevel at the upper area of the grip for the index finger and thumb. The beavertail is moderate, but doesn't inhibit a good shooting grip. Stippling is adequate for good purchase, but isn't too rough.

The dust cover features an accessory rail, so you can use a laser and/or light, though there is a factory model that includes a Viridian laser. The sights - which are drift adjustable, so they can be upgraded - are a hi-viz white U-notch rear and white dot front sight. Night sights and fiber optics are available from Ruger if so desired, and aftermarket sets will surely be available soon if not already from third party suppliers. They are a bit low-profile, which is good for a carry pistol.

The trigger is a tabbed trigger design, not unlike other Ruger pistols and Springfield XD pistols. A passive safety system is obviously part of the trigger mechanism, but a low-profile manual safety is located on the left side of the gun, along with the slide stop and magazine release. Controls are not ambidextrous, so lefties be aware.

Slide serrations are wide and are part scalloped, at the front and rear of the gun. This lets the user get good purchase on the slide for charging the pistol and press checks.

The gun features a magazine lock, so the slide release has to be used to return the pistol to battery. No slingshot here.

The DAO system actually makes for a better trigger than you'd think. The striker system on most comparable pistols doesn't engage the sear until the last part of the trigger pull. This has the effect of a trigger that is often mushy until it stacks at the very end and then breaks. Since the Security 9 is DAO, take up is minimal; the trigger stacks almost immediately and is consistent from front to back. However, the pull - about 6 pounds - is light for a DAO gun, with a tactile and audible reset.

It's actually one of the best triggers on a gun of this type besides that of a Walther or H&K VP9. It's consistent, tactile and rather smooth for a plastic fantastic. 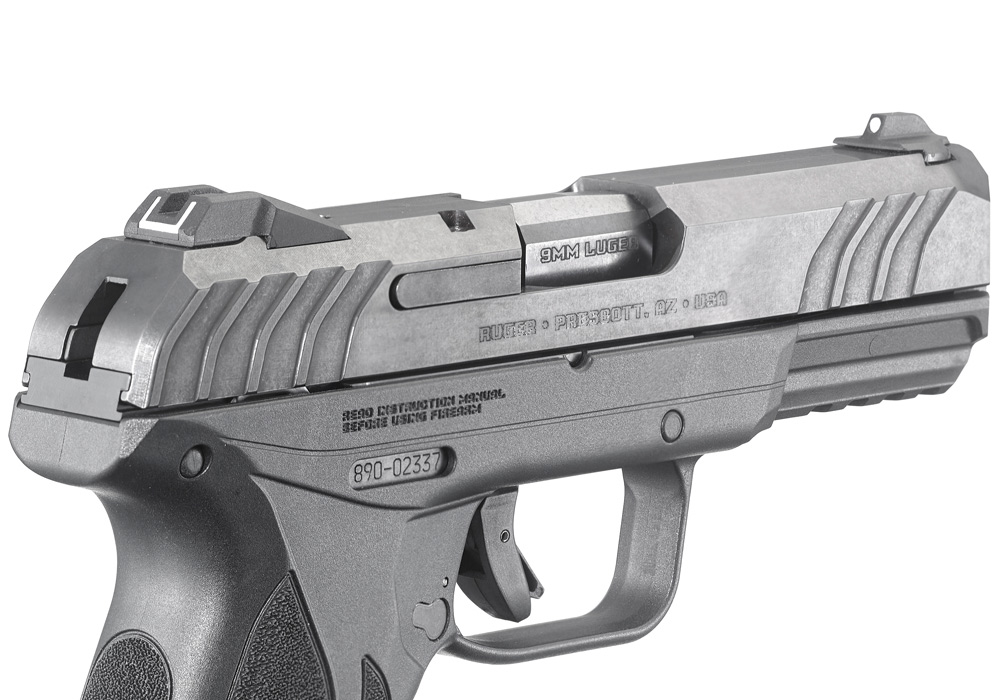 The theme of this Security 9 review is basically that this is one of the best values for money with any pistol.

Shooting the Ruger Security 9 is pleasant, as it's well-sorted all around. Felt recoil is more than manageable and it's quite accurate. For those used to a striker pistol trigger, it's going to take a little getting used to as this is a DAO pistol but with a light pull weight. The front-stacking nature of double action triggers is not something most shooters are used to anymore, but it's hardly a Ruger GP100, so no one should have issues with that.

Some people don't prefer the stock sights, but this goes for any gun. Some reviewers and owners have wished for a bit more traction on the grips, but that's easily fixed.

What's great about the Security 9 is that it's slim, light and compact enough for daily carry for most people. While plenty of folks prefer a subcompact single-stack 9mm and refuse to carry anything larger (for good reason) the Security 9 is still a very easy pistol to carry. It is definitely a little sleeker, a little more svelte, than other big brand counterparts such as the Glock 19 or S&W M&P9 Compact, so that is something.

If there were any complaints to be made, they would be rather minor for the most part. The magazine lock may put some people off as some folks don't like to use the slide stop. Additionally, the manual safety - at first, anyway; it could smoothe out with use - is difficult to engage though it is easily swept off.

Another drawback is the lack of ambidextrous controls. While this isn't a problem for most people (the vast bulk of the human population is right-handed) it is a barrier for lefties and also people who train with both hands, which is a good idea.

With that said, this pistol is a serious value for money. You'd almost have to come up with a good reason for spending more.

← Previous Next →
3 Comment(s)
Jonah
When will the security 9 compact version be available for the shapeshifter holster.
Reply
Scott
Great review. I bought one of these last year and am happy with the purchase. A couple of my buddies use G17s. It’s very comparable to those at half the price. I’ve run a bunch of rounds through it without a misstep. The only issues with accuracy have been my own. Can’t beat it for the price. You mention the slide lock system makes it so there can be no slingshotting with this pistol. I do it with mine almost exclusively as the lock is difficult to release (requiring a fair amount of pressure on a really low profile piece) and it works just fine. Also, if you slide a loaded magazine home with enough force it somehow disengages the lock and the slide rams home, ready to fire. I wouldn’t suggest the last method to everyone though!
Reply
Thomas Howe
The Security-9 is NOT a DAO pistol. It is Single Action only.
Reply