You don't have to invest in multiple holsters to be able to carry your S&W M&P40 however you want - you just need the right M&P40 holster. A versatile holster that allows for any type of carry the user wants. Sounds like a tall order, right?

Not really - but you'd be asking too much from other holster companies that are only interested in making holsters that are conventional. It's not their fault; it's just that they can't imagine making a Smith and Wesson M&P40 holster that takes effort to create.

Status quo is not good enough for Alien Gear and it shouldn't be good enough for you. That is exactly why we created the ShapeShift. It isn't a holster; it's an entire carry system, that allows you to carry exactly how you want, when you want. Carry as several iterations of an M&P40 concealed carry holster, or M&P40 open carry holster. It's designed to let you carry as you wish, with a few changes of components in a matter of seconds.

The ShapeShift starts with the holster shells. We created a new shell design, featuring interlocking rails and a tool-less twist lock system which allows assembly of either side of the Shift Shell, left or right half-shells, and the two trigger guards included in your ShapeShift base kit. From there, you choose how you want to carry. You can also install the amount of passive or active retention that you desire.

After an M&P40 appendix carry holster? Assemble one full shell and one half shell, and attach to the smaller included backing pad, then install the appendix carry belt clip. Install anywhere on the front of the waistband you wish.

If you prefer a more traditional Smith and Wesson M&P40 IWB holster, attach the same shell assembly to the larger backer. You may recognize it as being similar to our Cloak Tuck 3.0 holster, which it is descended from. It has the same neoprene backing pad and Alien Skin surface, as well as belt clips that are adjustable for ride height and cant. It's also compatible with the Cloak Dock IWB holster mount system.

If an M&P40 OWB holster is more to your liking, the base kit comes with two possible OWB configurations. If you prefer OWB concealment, follow the same steps to create the appendix carry configuration but install the belt slide attachment. This gives you a high-riding belt slide OWB holster, which conceals easier than you might think with minimal layering.

Should you prefer a much more robust design for open carry, assemble both full length shells and insert the paddle attachment to create an M&P40 paddle holster. This design gives you a full wraparound of our nearly-indestructible polymer, and can also be equipped with one or more active retention devices.

You also get our guarantee, Alien Gear's Iron-Clad Guarantee - one of the most comprehensive in the industry.
From the get-go, you get a 30-day "Test Drive" trial period. Take the first month of ownership to wear and evaluate your ShapeShift holster system. If you don't like it, if you aren't satisfied, contact us before the first 30 days have elapsed and we'll buy it back.

You also get a lifetime warranty. Whatever issue arises with your ShapeShift holster, regardless of how it happens, we will fix it or we will give you a brand new holster for as long as you own it.

We think once you try the ShapeShift, you won't be able to carry any other way... 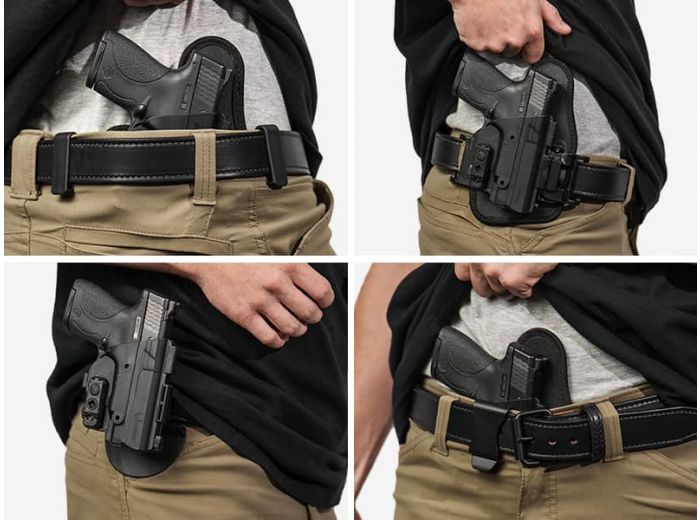