When it comes to a subcompact Glock, the eternal debate seems to be Glock 26 vs Glock 43. Each is a very popular CCW pistol, and each has a lot to offer the person who carries it which has led to both becoming a very popular CCW gun.

But which is better? That's a bit harder to nail down. The differences between the two are rather slight on paper, but in the real world can add up to some fairly significant differences.

Why do people argue the G26 vs the G43? Largely because of the (arguably perceived) benefits of magazine capacity contrasted with easier concealability...but the Glock 26 is not hard, at all, whatsoever, to conceal.

The Glock 26 holds 10+1 rounds of 9x19, in a compact double-stack magazine. Granted, it can actually hold more; what a lot of people like to do with the 26 is to carry a full-size magazine in a mag carrier as a backup. If shooting starts, and they empty the first magazine, a 15-round magazine from the 19 or a full 17-round magazine (from the 17) can be inserted into the pistol. If a person puts a sleeve on the magazine, it will create a full-size grip to boot. The 43 holds 6+1 rounds of same.

Additionally, aftermarket magazine extensions and floorplates can add an extra round or two and a bit more space for the pinky. They're available for the 43 too.

The 43, however, is smaller than the 26, which is already a small gun and was bestowed with the moniker "Baby Glock" upon its release in the 1990s. That has made it instantly successful as a CCW pistol. While the 26 is easily concealed, the 43 is even better suited to deep concealment. In a good IWB holster, it disappears but unlike the 26 it is also suited to pocket carry, though pocket carry is really not recommended with the light trigger of a Glock unless you do so with a pocket holster. 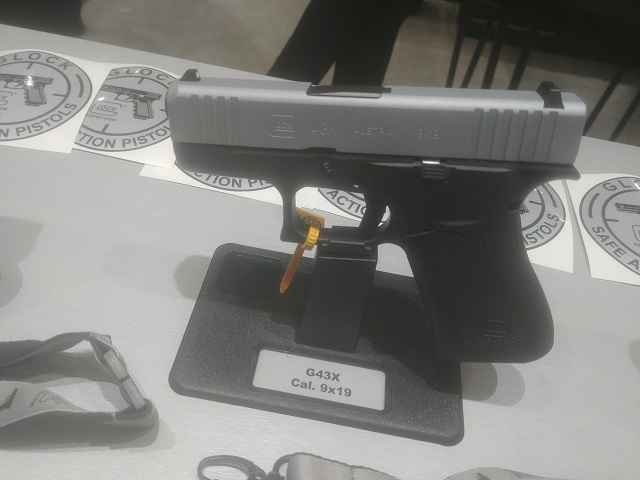 Just when we thought it was settled...the Glock 43X comes along. The Glock 43X throws a further monkey wrench in the works because it's a Glock 43 with more capacity. In fact, it has the same capacity as the Glock 26, at 10+1 with Glock's new Slim 01 magazine.

Getting those 4 more rounds on board does come at a cost, though not too much in the grand scheme of things. The frame is widened by about 1 cm, just under 1.2 inches. The grip is also extended, to 5.04 inches, though it's the same shape and palmswell as the 43. Unloaded weight, however, is almost unchanged, as the 43X weighs isn't even 0.2 ounces heavier than the 43.

The slide and barrel length is unchanged, as it is actually a standard Glock 43 slide that rides on the frame though it gets a silver NVD finish. It is not, as Glock told me at SHOT Show, stainless.

So, the grip is about the same size as a Glock 19, but is thinner than the Glock 26, though capacity is the same as the latter. Does that mean it's less concealable? On the right person...maybe. But having handled and shot the 43X...frankly, if you can't conceal it, chances are pretty good that you're the problem not the gun.

If anything, the 43X is actually an improvement. It's more comfortable in the hand and you get a better grip on it than the 43. As we know, a good tight grip leads to better shooting, which we noted in our Glock 43X review.

Just how different are the Glock 43 vs Glock 26 dimensions on paper? Not quite as different as chalk and cheese, but there's enough of a divergence to make a bit of a difference in the real world.

The 26 has a 3.42-inch barrel, the 43's barrel is 3.39 inches. Not much difference there, but the overall lengths are 6.41 inches for the 26 compared to 6.26 inches of the 43. Not much difference, but 0.2 inches can make a difference between not printing and starting to print at the top of the slide. 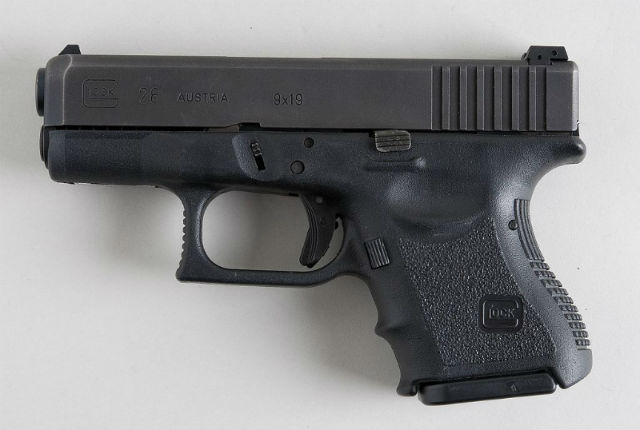 The on-paper measurements will also come into play when shooting the Glock 26 vs Glock 43. However, both of these guns are noted for shooting far easier than the compact size would suggest is the case. A truth of shooting of course is that the smaller the gun, the nastier it generally gets to shoot; smaller pistols, after all, lack the mass required to soak up recoil and get back on target faster.

Felt recoil is totally subjective though. Some shooters can find a tiny gun to be perfectly acceptable to shoot and others will swear it's the worst gun they've ever shot. Some shooters have found the 26 to be balanced enough between shootability and compact dimensions and others think the 43 is the better-shooting tiny Glock due to the slightly longer grip.

The 43X, on the other hand, is darn near perfect. You get a full grip in width, length and depth, but it's narrower than that of the 26, which is actually quite pleasant. Dare one say it...it's almost 1911-esque. The palmswell of the 43X fills the lower palm a bit better than the 43 does.

That said, the shorter grip has also led to a thriving aftermarket, including grip extensions for both these models. Some shooters eschew this and adapt to shooting with only two or three fingers on the grip in lieu of extending the grip at all. Whether that's acceptable to you is your decision. One advantage the 26 has here is that it can accept Glock 19 and Glock 17 magazines, should you prefer a full-size or compact magazine as a backup (helps at the range!) or if you'd prefer to carry with a G19 magazine with a grip sleeve, which is a popular practice with the Glock 26.

In the end, which is best? All are solid choices. The best bet is to get to a gun range that lets you rent one or both of them. Whichever you shoot best is the handgun to choose. As to the concealment issue, there are some people for whom even the 26 would be large enough to print on. If you wonder if you are such a person, hold a 26. If you think "I would have a hard time concealing this" then you're probably right.

If you asked me, it's the 43X in a walk, but what I like and what you like are going to be different things.

When you do head to the range, you're going to need a target...but why pay for paper targets if you don't have to? We'll give you as many as you want - you just need to download Alien Gear's printable 8.5” x 11” shooting target. Make as many copies as you like!


We will continuously be adding new target options to our lineup. Check out our complete free printable shooting targets page to see the full selection as they start rolling in.

← Previous Next →
13 Comment(s)
Matt P
Thank F_ck! England has got some thing right with Gun Laws..... If you can not get them you, or some idiot, can't use them! SO YOU DON'T have to; Or why the F_ck you r'd want to con-seal one!
Reply Nov 04, 2019 18:21
Mr. L.
I'd like to see if Glock would make a Glock 43w. Where they take a Glock 43 slide and put it on a shortened Glock 26 receiver. That way someone would have the smaller slide, but the ability to use double stack magazines.
Reply Oct 25, 2019 14:54
Shawn Leightley
I got both of them love the 43 more tho.but I love all glocks ...fan boy
Reply Dec 10, 2018 04:38
Herman R Martin
I love my glock 26 with iwb holster , I use a 1911 so the 26 was little at first . I feel like the 43 did not have the weight to feel good in my hands . I like at least 10 rounds .
Reply Dec 06, 2018 20:05
Tralaina
I'm looking for a better ccw, i've looked up small ones since i'm small. I liked the baby glock,now reading this I know which one I like better, the 26. That's next on my list. Thanks for the info.
Reply Nov 25, 2018 20:46
Paul McEwan
I have a Glock 26 that I carry off duty or in plain clothes, I added an XGrip mag sleeve over a Glock 19 mag and have never been more satisfied with a sub compact. I have a good comfortable grip with increased round count. At 18 bucks a pop for the XGrip, I set up four mags to use with my 26. On the flip side, I use the 43 when it’s hot outside and i wearing shorts or it’s just not feasible to carry the larger thicker Glock, both guns have a definite use in a given situation, up to the user what he needs.
Reply Nov 25, 2018 13:37
Oz Rodriguez
I purchased a glock 43 and a glock 27 love both pistols . I went with the glock 27 because I can shoot .40 ,and with a 9mm conversion barrel I have a g 26. I love the Glock 43 it conceals easily and comfortably with appendix carry for me .
Recoil has never been an issue for me .
Reply Nov 22, 2018 16:38
Steve Summerall
I just purchased a Glock 26 about 3 hours ago I appreciate those comments helps had in here about the Glock 26 made me feel better about getting it I did test fire Glock 26 in the shooting range before I bought this one so far I'm very happy with it I bought it for concealment concealed carry I have my permit I just need to round up a good holster for it thank you very much
Reply Apr 23, 2018 13:40
Christopher Drew
I carry every day and when it comes to concealment, the only true difference between the two guns is the slightly larger width of the 26. To me, the differences in size between the 26 & 43 are negligible (.15 inches in length and .16 inches in width) and the added benefits of 10+ 1 rounds with the easily upgradeable capacity of the 26 far supersed any benefits that I could gain from the slightly smaller package and limited capacity of the 43.
Reply Dec 24, 2017 06:20
Randy
I sold my Glock 26 G4 and replaced it with a Glock 43. I shoot the 43 well and for me at 5'6, 190lbs the 43 disappears IWB., this is my daily carry and I don't regret the purchase. I do however regret selling my G26 simply because of capacity and being able to use 15 rounds magazines from my G19, I didn't think about that at the time of the sale and now looking to buy another G26 G4..
Reply Dec 05, 2017 07:39
James
Great info and very helpful as I decide which Baby Glock to purchase. Well written by someone who knows what they're talking about. Thanks!
Reply Aug 21, 2017 20:12
Nate
Inherited a G26 Gen 4 .I use it in IDPA and USPSA and steel challenge out to 105 ' . Its fine .I use G19 magazines with sleeves when the rules permit . I have a Dawson sight and a polished ghost trigger bar at 3+ lbs.Wilson 115 gr whitebox RN ammo shoots about 99.9% of the time. I can conceal it easy and its still deadly up to 50" within 6"circle all day long and fast. Plus you can snap in a 22 round magazine if that makes your day .The 43 cannot do that ! a good gun for that once in a lifetime gunfight for sure ,and a daily competitive gun as well .
Reply Aug 20, 2017 16:20
Doug Entrekin
I have purchased a 43 and am well pleased with the concealment and shooting. Recoil is not a problem and overall the gun is well put together and functions good.
Reply Jul 04, 2017 06:59
Load more comments